One of the difficulties dealing with poverty, Greenfield said, is that poverty often looks different than people think it looks. “If you want to understand poverty, just walk into a random classroom in New York City with young school kids,” he explained. “The kids don’t even know they’re poor, but you look at them and they all look the same and they’re all dressed the same—but a third of those kids are poor.” He emphasized that looks are often not reflective of the true situation.

Hevesi, who chairs the Assembly’s Standing Committee on Social Services, agreed with Kimmel and added that it is the responsibility of the government to deal with poverty. “I see poverty as something you have to address and attack from a public policy perspective.” However, Hevesi said he thinks New York’s current policy to combat poverty is “poorly thought out” and that “we often do things that are more expensive and hurt people.” Hevesi has dedicated a significant part of his career in government to fighting the issues of poverty and homelessness. Since 2016, his legislative focus has been to establish the Home Stability Support (HSS) program, which would provide state-funded rental supplements to New Yorkers across the state facing housing crises. Albany included a $15 million pilot version of the proposal in the most recent state budget, and Hevesi has in recent months been crisscrossing the state to push for full implementation in 2019. This, Hevesi contends, would not only help families in need, but save state taxpayers the higher costs of operating shelters and funding eviction proceedings in housing courts across the state.” 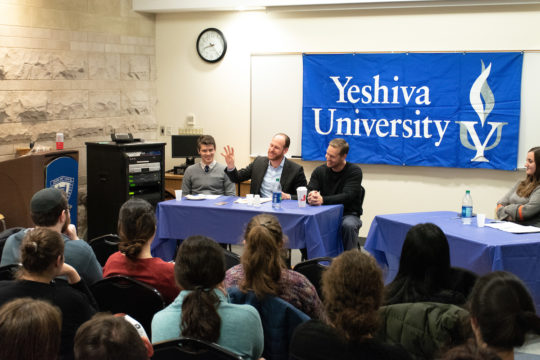 But all three panelists said that while there is a lot of work to do, they believe it can be done. “I believe that private philanthropy plays a huge role in solving the issue of poverty,” said Greenfield. He explained that the nonprofit organization he heads, the Met Council, specifically deals with Jewish poverty and provides 30 of New York City’s food pantries with their monthly supply of food. “Thirty thousand households don’t have enough food to end the week: That’s crazy, and that’s happening right now in New York City.”

Molly Meisels ’20S, one of the organizers, stated that “through our event, I wished to educate our student body on poverty, its causes and its most dire symptoms. By having three vastly diverse perspectives—sociological, nonprofit and political—our students were able to fully grasp what New York is up against.” She added that “I believe our students can utilize [the panelists’] perspectives to rally together to combat the war of poverty that is raging on our streets.”