On Wednesday, May 1, 2019, the Student Holocaust Education Movement (SHEM) held its annual commemoration honoring Holocaust survivors and victims with the theme of “Preserving the Flame.” This year’s commemoration was dedicated to Rabbi Meir Fulda z”l. 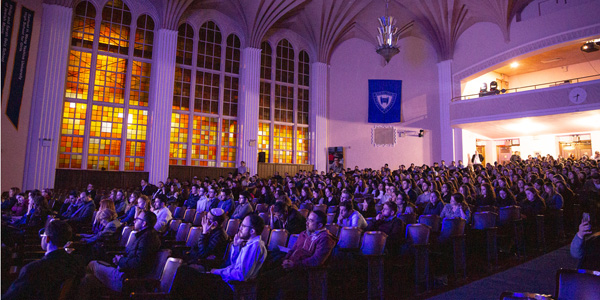 In his opening remarks, Yoni Broth, a board member of SHEM, noted a flame can stand for many things, “but tonight, it stands as both a symbol for lives that have been lost as well as  the many victims and survivors who did all that they could to carry the flame of Torah through the darkest of times and pass it on to the next generation. Because of them, the life of the Torah was never extinguished.” 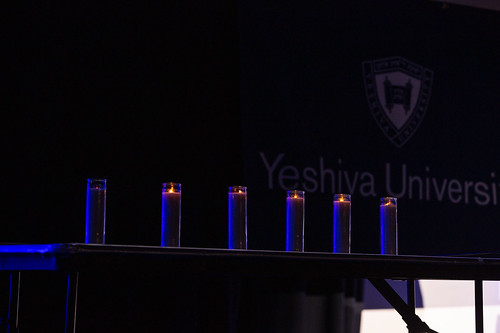 After the singing of the American national anthem and Hatikvah by Tani Polansky, the audience heard a delightful, inspiring and fierce narrative of endurance from Judith Tischler, who recalled her youth in Nazi-occupied Hungary and the many clever and inventive ways, born out of the desperation of the times, that her parents employed to keep the family safe and intact. 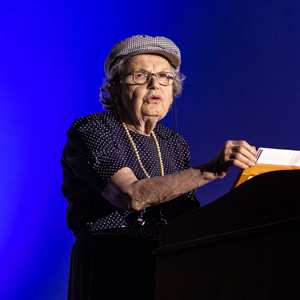 She went to Israel in 1948 and, after a short time there working on a kibbutz, she moved on to the United States, where she lived in Borough Park, got married, became a registered pharmacist, earned a culinary degree and worked as a substitute teacher. Her daughter attended Stern College for Women, and her grand-daughter is currently a Stern College student.

In a brisk and hopeful voice, she said to the audience, “The future is yours. I challenge you, based on our Torah values, not to be blinded by money or status: those who seem to have it all may not have it after all. Take time to value the simpler things in life. Develop self-discipline and will power. Act as both an American citizen and a Jewish citizen, staying connected to our brothers and sisters in different parts of the world.” She ended her talk with a rousing rendition of “Ani Ma’amin” [“I Believe”].

To honor the spirit and teaching career of Rabbi Meir Fulda z”l, in whose memory this event was dedicated, Dr. Samuel Schneider, emeritus associate professor of Hebrew, spoke movingly about about his friend and colleague as an introduction to a video of Rabbi Fulda recounting his experience of Kristallnacht to a rapt and respectful audience. As Rabbi Fulda noted in his presentation, the one element indispensable to the survival of the Jews is if every Jew loves every other Jew without reservation, a point he made directly in telling a story about how his father selflessly protected another man, a stranger and a Jew, from the whips of the Nazis. That example of self-sacrifice and humility, Rabbi Fulda said, is the example that all must follow.

Six candles were lit on stage to commemorate six different aspects of Holocaust remembrance: the six million murdered; the one-and-a-half million children slaughtered; the righteous gentiles and non-Jewish victims; the world of Torah that was lost; the link between survivors and the future generations; and to honor the survivors and their inspiring example.

After the lighting of the candles, Dr. Ari Berman, President of Yeshiva University, gave a moving delivery of Kel Maleh [“God Full of Mercy”].

In his closing remarks, Yosef Sklar, president of SHEM, hoped that the evening’s program “not only succeeded in teaching about the Holocaust but also in providing examples of how we can all further educate ourselves as well as the future generations.”