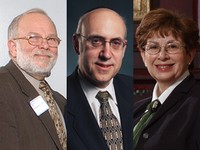 Jan 14, 2004 — Yeshiva University President Richard M. Joel traveled to Israel in January to meet with American students studying abroad, dignitaries, and other officials. His trip is part of a broader effort outlined in several speeches to build upon the strong ties between Israel and YU.

In Israel, President Joel visited Bar-Ilan University and was hosted by its President Moshe Kaveh. Later, President Joel dined with US Ambassador to Israel Daniel Kurtzer, a 1971 graduate of YC, and his wife, Sheila.

In his investiture speech President Joel imagined an invigorated relationship between YU and Israel, saying, “Let’s review our curricular offerings dealing with Israel and enrich them. Let’s work to offer more internships in Israel, more extracurricular support for Israeli programming, and appropriate relationships with Israeli universities and educational institutions.”

The YU contingent also visited a laboratory near the Dead Sea where tachelet (Biblical blue dye) is manufactured for coloring tzitzit ( fringes on a four-cornered garment worn by men as a Biblical commandment to recall the exodus from Egypt).

President Joel and Deans Bacon, Adler, and Snow returned from Israel on Jan. 15.