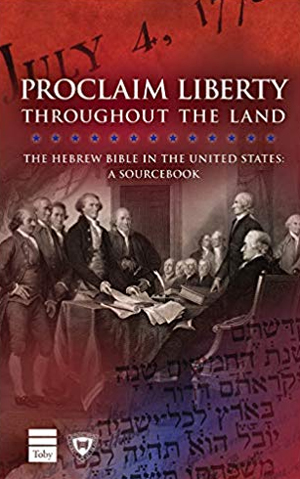 The Zahava and Moshael J. Straus Center for Torah and Western Thought at Yeshiva University recently released Proclaim Liberty Throughout the Land: The Hebrew Bible in the United States: A Sourcebook (YU Straus Center/Toby Press). This sourcebook, the first of its kind, assembles foundational documents of American history side by side with the biblical verses that inspired them, and allows the reader to learn how impactful the Hebrew Bible has been on the American idea. The volume was edited by Rabbi Dr. Meir Soloveichik (the Center’s director), Rabbi Dr. Stuart W. Halpern (the Center’s senior program officer), Dr. Matthew Holbreich (a resident scholar at the Center) and Dr. Jonathan Silver (a senior director at the Tikvah Fund).

As Proclaim Liberty demonstrates, the members of the First Continental Congress, despite their religious diversity, were united by a shared heritage rooted in the text of the Hebrew Bible, stretching back to their Puritan forefathers who founded the Massachusetts Bay Colony more than one hundred years earlier. Turning to the Hebrew Bible for inspiration, solidarity, comfort and purpose, as the members of the First Continental Congress did, is a common theme in American history. In fact, one cannot understand the American political tradition and its articulations through time without understanding America’s relationship with the Five Books of Moses. The Bible has taught Americans to speak and think about chosenness, exodus and covenant. The Hebraic worldview articulates a vision of human life that is redemptive and endowed with sacred meaning and which seeks to combine righteousness and freedom. It is this worldview that has contributed to the American moral language of liberty.

The editors’ selections of source material, including sermons, letters and seminal presidential addresses, demonstrate that the American Republic and the entirety of its history has been accompanied by the music of the Hebrew Bible, serving as a primary source of political and cultural vocabulary in the minds of the Puritan settlers, revolutionaries, African slaves, leaders of the civil rights movement and the broader population.