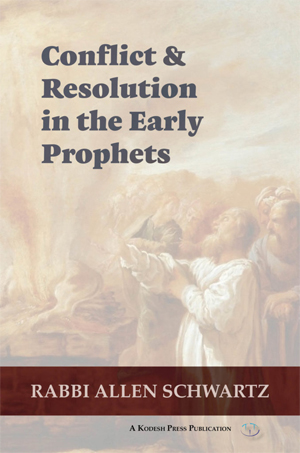 On Tuesday Nov. 17, 2020, Yeshiva University Libraries presented a book talk with Rabbi Allen Schwartz, Raymond J. Greenwald Chair in Jewish Studies at YU, where he has taught since 1983.

The talk was moderated by Rabbi Shalom Carmy, assistant professor of Jewish philosophy and Bible at Yeshiva University.

Rabbi Schwartz engaged in a vigorous and enlightening discussion on the topic of his recently published third book, Conflict & Resolution in the Early Prophets (New York : Kodesh Press, 2020): how to explain the many instances of seeming violations of Torah law in the books of Joshua, Judges and Samuel, where the perpetrators appear to be unaware that their actions violate Torah laws. Rabbi Schwartz argued that “Chazal [Jewish sages] were very much aware of these violations, they reacted to them, and the most important point is, that in order to lend credence to that reaction, they showed that the text itself has some kind of hint that there was something wrong.”

An example of such a violation: King David’s marriage to Michal, daughter of King Saul, her then being given away in marriage to Palti ben Layish, only to be later re-married to David. The Bible (Deut. 24:4) forbids the first husband from re-marrying his former wife if she had then married and subsequently divorced (or been widowed) from another man. Chazal had a range of answers to this problem, from arguing that, in fact, no violations were committed, to various strategies to mitigate these violations. Rabbi Schwartz limited his discussion to Chazal of the classical period, relegating comments by Rishonim to footnotes and excluding later opinions altogether.

Rabbi Schwartz also discussed an innovative strategy employed by the 13th-century Sefer Yere’im [commentary on the Mitzvot] to explain King David’s apparent sin in sending an embassy of peace to the Ammonites in contravention of a Biblical prohibition (Deut. 23:7) by explaining that the Torah forbade initiating peace but not responding to a peace offering by the Ammonites, which was the case with David’s embassy.