On His First Day as President, Rabbi Dr. Ari Berman Meets With Students, Faculty and Staff Across Campuses 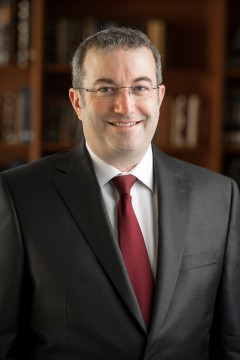 “Yeshiva is filled with so many wonderful people engaged in exciting work. As I craft a new institutional mission and vision for Yeshiva University, I know our future will be brightest when we work together with a sense of common purpose. We will build upon our past and prepare responsibly for tomorrow,” said Rabbi Berman, a four-time YU alumnus. “I am humbled by the many inspiring partners I had the opportunity to connect with so far, and eagerly anticipate getting to know many more.”

The University will celebrate Rabbi Berman’s official investiture on September 10, 2017.

Before assuming his role at YU, Rabbi Berman was the head of Hechal Shlomo – Center of Jewish Heritage in Jerusalem, where he led a transformation of the historic organization into an international center for Jewish life, learning and leadership. He also served as a lecturer of rabbinic literature in Herzog College’s Jewish Studies Department and was a member of its Executive Leadership Council, the governing body that establishes policies and sets direction for all major issues regarding the operation of the college.

Rabbi Berman grew up in Queens, New York, and graduated from four YU schools with distinction, earning honors for his academic work in both secular and Jewish studies. He was recognized by the YU-affiliated Rabbi Isaac Elchanan Theological Seminary (RIETS) for his written scholarship and was chosen to speak on behalf of the graduating student body at his Chag HaSemikhah [rabbinic ordination ceremony]. He was also selected as a Fellow in the Kollel Elyon, the three-year post-ordination study program for RIETS’s most promising students and future rabbinic leaders. He graduated from Marsha Stern Talmudical Academy/Yeshiva University High School for Boys, received a bachelor’s degree from Yeshiva College, and earned a master’s degree in medieval Jewish philosophy from the Bernard Revel Graduate School of Jewish Studies.

In 2000, he became rabbi of The Jewish Center in New York City, after having served there as rabbinic intern, assistant rabbi and associate rabbi. Under his leadership, the congregation experienced significant success by key metrics including congregational satisfaction, membership, programming, services, outreach, public activities and financial strength. Simultaneous with his pulpit at The Jewish Center, Rabbi Berman served as an instructor of Talmud in the Irving I. Stone Beit Midrash Program at Yeshiva College. In 2008, Rabbi Berman made aliyah [immigration] to Israel. He obtained a PhD from Hebrew University in Jewish law and thought during the High Middle Ages.