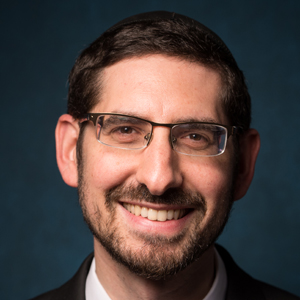 Rabbi Dr. Yosef Kalinsky, currently the associate dean for men’s undergraduate Torah studies, has been promoted to the dean of the program, overseeing the Mazer School of Talmudic Studies, the Irving I. Stone Beit Midrash Program, the James Striar School and the Isaac Breuer College of Hebraic Studies.

Rabbi Menachem Penner, the current dean of the program as well as the Max and Marion Grill Dean of the Rabbi Isaac Elchanan Theological Seminary (RIETS), will now focus his energies more fully on the RIETS semicha [rabbinic ordination] program while Rabbi Kalinsky, working in close partnership with Rabbi Penner, will handle day-to-day operations and academic oversight for all undergraduates.

“Rabbi Kalinsky’s dedication to each and every student is extraordinary,” said Rabbi Penner. “I am so pleased that his work is being recognized with a promotion to the position of dean,” a sentiment shared by Dr. Selma Botman, provost and vice president for academic affairs, who praised Rabbi Kalinsky for his “inspired leadership in undergraduate Torah studies” and his “exemplary willingness to work across YU’s schools and colleges. I look forward to working with Rabbi Kalinsky in his new role.”

Rabbi Kalinsky has had a long membership in the Yeshiva University family. He graduated from Yeshiva College in 2000 with a BA in economics, then went on to get semicha from RIETS (as well as participating in the Wexner Kollel Elyon and the Yadin Yadin Kollel), a master’s degree from the Azrieli Graduate School of Jewish Education and Administration, and an MSW and PhD from Wurzweiler School of Social Work. In 2007, he began working in the dean’s office of undergraduate Torah studies, becoming assistant dean in 2008 and associate dean in 2012.

“My philosophy has always been to establish relationships, both personal and professional, with all members of the YU community” says Rabbi Kalinsky. “Working together is the best way to cultivate a positive environment that our students need to learn and to grow. And even though my title has changed, my goal is still to be as involved as much as I can with each individual student to ensure that he is in the right learning environment and all his academic and spiritual needs are being met.”

As an administrator living in the Washington Heights campus for more than 20 years, Rabbi Kalinsky has a unique perspective and insight into the student body. It is not uncommon for him to meet with students after 9 p.m. or to invite students to his apartment for Shabbat meals or for holidays.

Rabbi Kalinsky enjoyed working closely under the leadership of Rabbi Penner and thanks him for “giving me the liberty to take initiative and to tackle issues.” He cites as one example a tracking system he introduced that compiles data on each student so that administrators can know how each student is doing each semester and, if needed, tweak individual courses of study to make sure the students are being provided an individualized approach to their education.

“I am very pleased to hear about Rabbi Kalinsky’s appointment,” said Rabbi Michael Rosensweig, the Nathan and Perel Schupf Chair in Talmud and a rosh yeshiva at RIETS. “He is a consummate professional who is particularly equipped to build on his previous administrative and educational contributions in guiding and facilitating the Torah growth of our special student body.”

In terms of his goals as dean, Rabbi Kalinsky hopes to find additional ways to unify all four programs while simultaneously continuing to strengthen each individual program. Further, he will continue to encourage all Torah studies faculty to cultivate relationships with their students as a priority and an integral part of their role as teachers. “I want to use all that I have learned as a social worker, an educator, an academic and a rabbi to do whatever I can to help the University.”