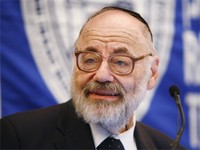 Aug 12, 2008 — Yeshiva University’s Rabbi Isaac Elchanan Theological Seminary (RIETS) will honor Rabbi Zevulun Charlop for his extraordinary achievement in Torah learning and leadership at its Annual Dinner of Tribute on September 17 at The Grand Hyatt in New York City. Rabbi Charlop, who served as the seminary’s dean for 35 years, is dean emeritus of RIETS and special advisor to the President on Yeshiva affairs.

The dinner will also honor Herbert Smilowitz and his son, Rabbi Mark Smilowitz, as the inaugural America/Israel Dor L’Dor [generation to generation] Award recipients. The award recognizes parents and children who have made outstanding contributions to the advancement of higher Jewish education in the Torah Umadda model and who have made a meaningful impact in communities in both the United States and Israel.

RIETS will also pay recognition to members of its tenth, twenty-fifth, and fiftieth anniversary classes (1958, 1983, and 1998).

A Yeshiva College graduate of 1951, Rabbi Charlop received his semikhah [rabbinical ordination] from RIETS in 1954. He was appointed The Max and Marion Grill Dean of RIETS in 1971 and served in that position until this past July. Rabbi Charlop is also the longtime spiritual leader of the Young Israel of Mosholu Parkway, in his native Bronx, for the past 54 years.

“Under Rabbi Charlop’s nurturing leadership and guidance, RIETS and Yeshiva have experienced enormous growth that has directly impacted Jewish communities around the world,” said Julius Berman, chairman of the RIETS Board of Trustees. “His love of learning, acute intellect, and broad vision has inspired and developed thousands of rabbis, educators, and Jewish scholars of impeccable quality.”

Rabbi Charlop comes from a long line of rabbinic leadership and Jewish scholarship. His father, Rabbi Jechiel Michael Charlop, was ordained at RIETS in 1921 and served as the spiritual leader of the Bronx Jewish Center for 46 years. His grandfather, Rabbi Yaakov Moshe Charlop, was an associate of Chief Rabbi Abraham Isaac Kook and rosh yeshiva of Merkaz HaRav in Jerusalem from its inception.

“Rabbi Zevulun Charlop is the scion of a distinguished rabbinic dynasty, fiercely representing Torah, confident of its role in the modern world, and insistent that its message is one for our time and all time,” said Yeshiva University President Richard M. Joel. “For more than 35 years, Rabbi Charlop led RIETS with a brilliant mind, a gentle hand, and a sensitive heart. We are excited that his experience and wisdom will continue to benefit the entire university as he joins my cabinet as dean emeritus and special advisor on Yeshiva affairs.”

Herbert Smilowitz joined the RIETS Board of Trustees in 1994 and now serves as its vice chairman. He received the RIETS Eitz Chaim [Tree of Life] award in 2002. Mr. Smilowitz and his wife, Marilyn, are Benefactors of YU and reside in West Orange, NJ.

Rabbi Mark Smilowitz graduated from Yeshiva College in 1992 and earned his master’s degree from YU’s Azrieli Graduate School of Jewish Education and Administration. He received semikhah from RIETS in 2002. Rabbi Smilowitz resides in Beit Shemesh, Israel with his wife, Michelle, and four children. He teaches an advanced Gemara class at Yeshivat Nachshon, a local yeshiva middle/high school. While in the United States, he served as a pulpit rabbi and later as an educator in Seattle, Washington.