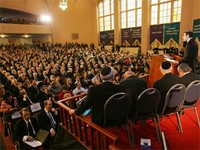 Mar 27, 2006 — The historic setting of Lamport Auditorium in Zysman Hall was filled with excitement and emotion as YU’s Rabbi Isaac Elchanan Theological Seminary formally celebrated the ordination of 185 rabbis — the largest cadre of rabbis since its founding 120 years ago. More than 1.600 people attended the ceremony and the crowd spilled over to the Harry Fischel Beit Midrash and Weissberg Commons where guests viewed the event on video screens. Each rabbi received a specially inscribed book of Igrot Ha’Grid which contains letters of correspondence of Rabbi Joseph B. Soloveitchik, considered the spiritual leader of Orthodoxy, to his father and other Torah luminaries of his early years.

“This is a time to rejoice and celebrate each of your accomplishments,” said YU President Richard M. Joel in his message to the musmakhim (ordained rabbis). “You have chosen to be the modern day Kohanim (descendants of the priests). You have chosen, as Shevet Levi (the Levites) of old, to dedicate your lives to serving the Jewish people and spreading kedusha (holiness). You have a responsibility to light a flame where there is much darkness and enrich us all one shiur (lesson) at a time, one drasha (sermon) at a time.”

Among the newly ordained rabbis are five physicians, four attorneys, one former sea captain, a former Rhodes scholar, a dentist, and the President’s son, Avery.

Israel’s Ambassador to the U.S., Daniel Ayalon, delivered heartfelt greetings. “You exemplify one God, one Jewish spirit, one Torah. When I see how you rejoice, I know there is a great future ahead of us. Your true role is to unleash the great energy of the Jewish people and to ride that energy for tikkun olam (repairing the world).

The ambassador also paid tribute to one of the honored guests, philanthropist Marcos D. Katz, who was recipient of the Eitz Chaim Award.

Also honored, with the HaRav Yosef Dov Halevi Soloveitchik zt”l Aluf Torah Award, was Rabbi Zevulun Charlop, Max and Marion Grill Dean of RIETS, who has led RIETS for 35 years. This is only the third time RIETS has presented the award.

Rabbi Norman Lamm, Rosh HaYeshiva of RIETS, delivered the keynote address. Rabbi Reuven Brand, a fellow of the Bella and Harry Wexner Kollel Elyon and Semikhah Honors Program and founder of Lman Achai, which educates American Jews about the needy in Israel, presented a rousing and inspirational talk on behalf of the musmakhim.

The ceremony honored individuals who completed ordination from 2002 to 2005. Since its founding more than 100 years ago, RIETS has ordained more than 2,700 rabbis. They occupy an overwhelming number of Orthodox pulpits in North America as well as major educational, communal-professional, and lay leadership positions.