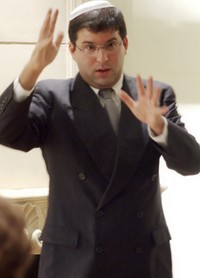 The institutionalization of religion in Israel has created a bureaucracy of closed doors, says Rabbi Seth Farber, an advocate for improved relations between religious and secular Jews in that country. He spoke May 2 on “Democracy and Religion: Fighting for Israel’s Soul,” the third in a seven-part lecture series celebrating Stern College for Women’s 50th anniversary.

An alumnus of Rabbi Isaac Elchanan Theological Seminary and Bernard Revel Graduate School of Jewish Studies, Rabbi Farber is founder and director of ITIM: The Jewish Life Information Center, which advises unaffiliated Israelis on Jewish life cycle rituals. Some 70 alumnae and guests attended his talk, cosponsored by Dr. Marcia Robbins-Wilf, founder of the Dr. Marcia Robbins-Wilf Scholar-in-Residence Program at SCW and a founding board member of the school.

In Israel, ritual Jewish life—marriage, burial, brit mila (circumcision), and conversion—are government-controlled through the Chief Rabbinate, often by ultra-Orthodox bureaucrats who many secular Israelis describe as autocratic, according to Rabbi Farber. He is author of the recently released An American Orthodox Dreamer: Rabbi Joseph B. Soloveitchik and Boston’s Maimonides School (Brandeis University Press, 2004).

“As a result, rank and file Israelis feel alienated and disconnected from Judaism,” he said. Yet, a recent poll indicated that most Jewish Israelis welcome religious life cycle events in a traditional manner: 91 percent think it is important to say Kaddish (the prayer for the dead) for a parent, 82 percent think it is important to be married by a rabbi. “A huge gap has developed between what people want and what is,” Rabbi Farber explained, adding that the central problem for many is a sense of powerlessness in the face of “closed doors.”

He said ITIM and other groups seek to bridge that gap by “mapping out every moment in the Jewish life cycle,” and by letting secular Israelis know that “someone out there cares about them and can make a difference in their lives.”

ITIM, for example, offers explanatory pamphlets in Hebrew, English, and Russian, and maintains a Web site that details all aspects of each ceremonial observance. It also offers a toll-free hotline and e-mail; Rabbi Farber often personally intercedes with the Chief Rabbinate on behalf individuals or couples who feel they have no place else to turn.