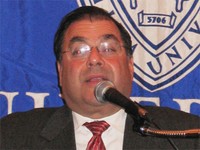 Feb 5, 2004 — Rabbi Shlomo Riskin, chief rabbi of Efrat, Israel, addressed a packed crowd at Weissberg Commons on Wednesday, Feb. 4, on “Israel’s War Against Terrorism Seen from a Halakhic, Political, and Theological Perspective.” His message to hundreds of students was that “Our common humanity has the power to overcome all barriers.”

Rabbi Riskin proposed that Jews have a critical mission that is more important than ever today—to ensure that everyone accepts that humankind is created in the image of God and has freedom, and the right not to be subjected to terrorism.

Following his lecture, Rabbi Riskin took questions from students. The event was sponsored by the Israel Club, which made materials available on aliyah and how to contribute to Israel.