In a classroom at Yeshiva University’s Beren Campus on  a recent Wednesday night, these were a few of the words 20 professionals used to describe the passion that drove them to pursue Jewish communal work and ultimately, to enroll in a new Certificate Program in Jewish Philanthropy at YU’s Wurzweiler School of Social Work.

“Remember that passion and those values and bring them to work with you,” guest lecturer Andrea Wasserman, a philanthropic and organizational development strategist, told students. “What we’re doing boils down to so much more than a financial transaction. We’re fostering partnerships that make the world a better place by helping your missions thrive.”

As Jewish causes face more fundraising challenges than ever before—including increased competition both within the Jewish world and with other nonprofits and donors hit hard by the economic recession—Wurzweiler launched the new Certificate Program to provide talented Jewish communal professionals with the tools they need to succeed in the modern philanthropic arena.

“This is a win-win situation for Wurzweiler and our affiliated Jewish agencies,” said Dr. Carmen Ortiz Hendricks, the Dorothy and David I. Schachne Dean of Wurzweiler. “Jewish agencies are seeking qualified, professional fundraisers to help advance their mission and goals. The graduates of this program will help to fill this gap, and our MSW students can add these new specialized skills to their professional practice.”

“Meaningful philanthropy will ensure the Jewish future both through raising funds and raising sights,” said YU President Richard M. Joel. “This program seeks to train the best and brightest to do both.”

The Certificate Program kicked off this month with participants from a wide range of Jewish organizations and professional backgrounds, including the UJA Federation of NY, Joint Distribution Committee (JDC), American Jewish World Service, Yachad, and American Friends of Shalva, among others. Classes meet twice a week and are offered in two key areas, The Art and Science of Fund Raising and the Jewish Philanthropic Tradition. Both are frequently guest-taught by leaders in the field, including Jeffrey Solomon, president of The Andrea and Charles Bronfman Philanthropies; Ruth Messinger, president of the American Jewish World Service; and Yossi Prager, North American executive director for The AVI CHAI Foundation.

The program also features a 56-hour internship with top-level professional mentoring in a Jewish development office, either within the institutions where participants currently work or as an independent project.

“We aim immediately to address the chronic shortage of skilled, knowledgeable and committed fundraisers for Jewish organizations by preparing professionals who are firmly grounded in fundraising skills as well as the most current and effective strategies for resource development,” said Dr. Saul Andron, Hausman Chair in Communal Social Work and associate professor at Wurzweiler, the Certificate Program’s coordinator.  “Fundraising has become increasingly sophisticated and complex, with new methods of raising money and cultivating and inspiring prospects. Any job-finding site in the Jewish world will starkly demonstrate the lack of and need for fundraisers trained like this in Jewish organizations today.”

“Modern professionals need this kind of program because there are hundreds if not thousands of Jewish nonprofits competing for the Jewish philanthropic dollar in New York alone,” said Dan Forman, vice president for institutional advancement at YU, who helped design the program and will lead several of its class sessions. “There is a science to what Jewish fundraising could and should be—for instance, how you communicate and develop a relationship with a donor to balance meeting a need of the organization with fulfilling the wish and desire of the donor.”

The two courses will hit on all the key elements of modern Jewish fundraising from the inside perspective of successful professionals. Sessions on the annual and capital campaigns, major gifts development, legacies and endowments, and women’s philanthropy will go hand-in-hand with sessions about how to harness technology and social media for maximum impact and the changing nature of fundraising and motivations of younger generations of donors.

“There’s a sea change happening right now in Jewish philanthropy,” Andron said. “The next generation of major philanthropists are giving differently—they want to be much more involved directly in the causes they support. We have to understand what excites the contemporary Jewish donor and this program provides a formal setting to delve into some of these complex issues.”

For Melina Rosenberg, a resource development operations associate at the JDC, the Certificate Program fell—to use an expression from her childhood in the Roman Jewish community—“like manna from the sky.” Since moving to the United States from her native Italy, Rosenberg had been fascinated by the world of American Jewish philanthropy. As a temporary employee for the JDC before she even began working there full-time, she recalled discovering a book titled The Seven Faces of Philanthropy at the office.

“I picked it up and started reading it and saw how much psychology, motivation and personal development was involved with being a donor, the personal investment in the money you give,” Rosenberg said. “It opened up a whole new world for me.”

Primarily in the world of nonprofit project management until that point, Rosenberg was already thinking of professional courses she could take to expand her skills when her supervisor suggested the Certificate Program at Wurzweiler. Rosenberg is especially excited by the opportunities the program offers to apply the skills participants will be learning in a mentored setting. “It’s a great way for me to initiate a project that falls within my own interest and that I can keep working on when the course is done—like a stepping stone,” she said. “What’s great is that I am very enthusiastic about the things I’m passionate about, and I can tell that the same amount of heart and soul that I’m putting into this course is being put into it by the organizers as well.” 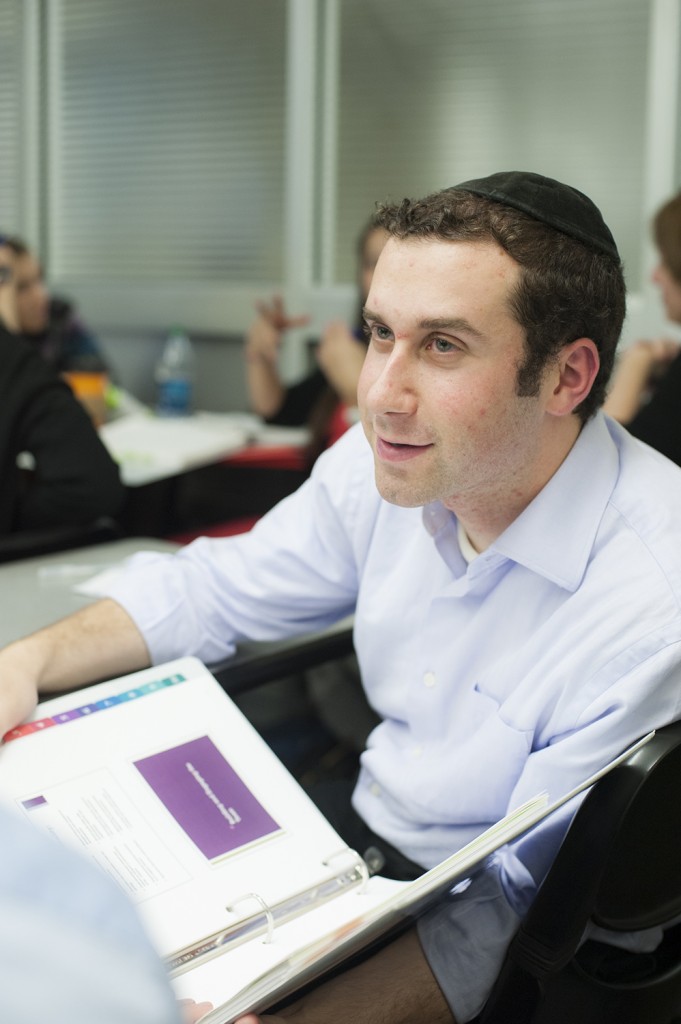 That enthusiasm is shared by fellow participant Keith Barbarosh, an attorney who decided to learn more about Jewish philanthropy after serving on a capital campaign for his local synagogue. While the campaign was successful, Barbarosh felt mystified by the process. “I would love to help an institution or mission that enlivens a Jewish legacy, but I didn’t understand the practicalities, the framework or the science of what I was doing,” he said. “I really want to make a difference, and when I’ve completed the Certificate Program, I’ll have a wealth of knowledge and resources—including my fellow students, my teachers and mentors—to make positive and substantial contributions to assist worthwhile Jewish causes. At the end of the day, we’re talking about the financial future and possibly survival of Jewish organizations—we can’t take that lightly.”

To learn more about the Certificate in Jewish Philanthropy, contact Dr. Saul Andron at sandron@yu.edu.