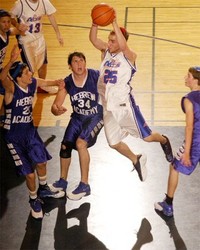 New York, NY, Mar 18, 2004 — The first prime time game of the night lived up to it’s billing, as Hebrew Academy of Atlanta edged past Ida Crown (Chicago) 62-53. Only four players scored for Hebrew Academy, which was playing with a very short bench and barely a six-man rotation.
Red Sarachek Basketball
Tournament Web Site

Adam Rich scored 17 for the Ida Crown Aces and Micah Engler scored 13 more, but it was not enough to overcome the balanced attack of Hebrew Academy.

Sharp-shooting Ariel Grobman and Josh Gordon scored 17 a piece for Miami, and Zach Gordon and Tzvi Heber each added 14 more. The Gordon brothers – son of coach Larry Gordon – went a combined 12-for-12 from the free throw line.

Miami will play at the Max Stern Athletic Center tomorrow, while Ida Crown will drop to the second tier at TABC.