From November 13 to 14, approximately 200 rebbetzins [rabbis’ wives] from across the United States and Canada gathered together for the Rebbetzin Esther Rosenblatt Yarchei Kallah for Rebbetzins. The Yarchei Kallah was organized by Yeshiva University’s Center for the Jewish Future (CJF) and held at Congregation Keter Torah in Teaneck, New Jersey. 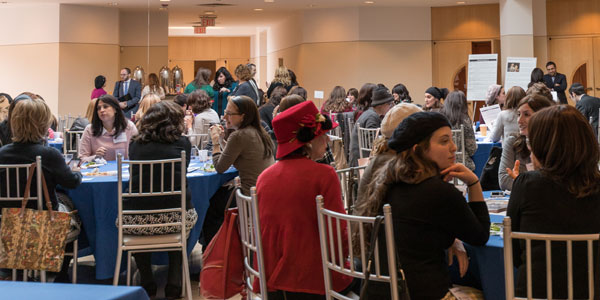 Rabbi Yaakov Glasser, David Mitzner Dean of CJF, explained that “this program provides an opportunity to network with others in a safe and supportive environment, develop lasting relationships, acquire new resources and skills, and enjoy the intellectual stimulation of Torah study with leading Jewish scholars while being mentored by more experienced rebbetzins. This event acknowledges the great contribution and influence of rebbetzins in the growth and success of the rabbinic couple in developing their community.”

The focus of this year’s event was “Olam Chesed Yibaneh: Chesed in Our Homes, in Our Communities and in Our World,” and the issues on the agenda touched on many different topics, including the philosophical (the pursuit of peace in halacha), the day-to-day (the discipline of children, a professional wardrobe), the therapeutic (identifying clinical issues in congregants) and the financial (fiscal fitness for young couples), to name a few.

The event also featured an impressive roster of speakers, including Rabbi Dr. Ari Berman, president of Yeshiva University; Dr. Danielle Wozniak, Dorothy and David Schachne Dean at Wurzweiler School of Social Work; Daniel Pollack, professor at Wurzweiler and an expert in child safety issues; and Keshet Starr, managing director of the Organization for the Resolution of Agunot (ORA). 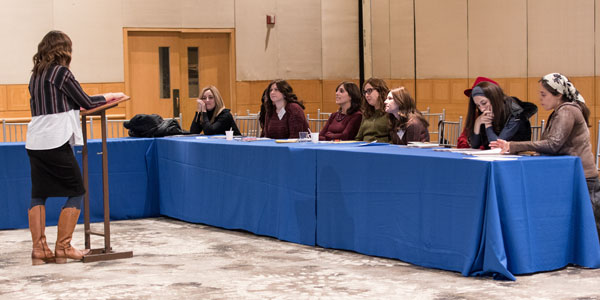 A highlight of the first day was the opportunity to have a conversation with Dr. Berman, about the future of both the University and the University’s connection to the larger Jewish community. He spoke inspiringly about the “YU of tomorrow,” and how community members were supportive of his efforts to establish YU as a beacon of Jewish values and an important voice in the global conversation. He also surveyed them about what they thought were the salient issues both in the communities where they lived and in their lives within those communities. 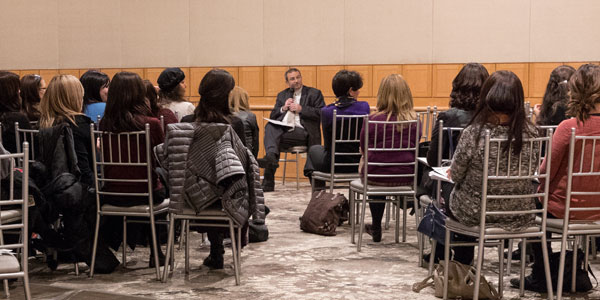 There were also plentiful opportunities for attendees to meet one-on-one with individuals and representatives of organizations on specific issues, such as domestic violence, family planning, physical fitness, pensions and retirement, making aliyah and pastoral counseling.

Karen Hochberg, who hails from Jamaica Estates, New York, and has spent 43 years as a rebbetzin, “loved being part of the camaraderie among the rebbetzins who all share a unique role, and one that immediately forges a common bond among both the newcomers and ‘veterans’ alike. The conference sessions this year were often intense, dealing with issues such as self-harm, suicide, addiction, sexual predators, abuse, and infertility. But these are critical issues that rebbetzins often find themselves confronting, and we were, once again, very grateful to be offered insights and advice from the top experts in their fields.”

For Rifki Freundlich, from Hampstead, Quebec, the Yarchei Kallah “makes me more self-aware and allows me to take a step back from my work so that I can ultimately re-engage from a place of strength. It offers practical tips, new perspectives and emotional support. I return home with a realistic assessment of the larger Jewish scene, realizing the unique strengths of my particular position, grateful for YU’s support network and with a renewed appreciation of what can be accomplished.”

Meira Davis, coordinator of the Personal and Professional Enhancement Program for Rebbetzins at CJF and coordinator of the event, noted that “the rebbetzins look forward to this as a highlight of their year, where they can come together for two days of networking, camaraderie, learning, personal growth, delicious food and pampering in a setting with true peers.  They return home, rejuvenated, inspired and with a dose of chizzuk [strengthening] to propel them forward to achieve increased personal and communal growth.”