In 2016, the Yeshiva University Museum (YUM) acquired a model of the Old City of Jerusalem, created in the 1880s by a man named Moses Kernoosh of Ann Arbor, Michigan. Very little is known about both the man and the model, which depicts Jerusalem in 1872-1873, based on research published in 1987 by Ruth Kark in an article titled, “Jerusalem in New England,” published in Ariel: A Review of Arts and Letters in Israel.

The model itself has taken a beating over the past 130 or so years as it traveled from Michigan into the hands of its first identified owner, Dr. P. Stefan Kraus, a psychiatrist practicing in Wellesley, Massachusetts, in 1974, then on to the American Jewish Historical Society (AJHS) near Brandeis University in Waltham and eventually into the hands of Bonni-Dara Michaels, collections curator at YUM.

It was a good set of hands to fall into. Michaels reached out to Kay Khan, the daughter of Dr. Kraus, to let her know that YUM had acquired the model. While viewing the model at the Museum, Khan offered to fund its conservation, cleaning and stabilization. Michaels was delighted and now hopes that Khan’s generosity will inspire others to give towards the care of the Museum’s collection, so that it can be best preserved for future generations. 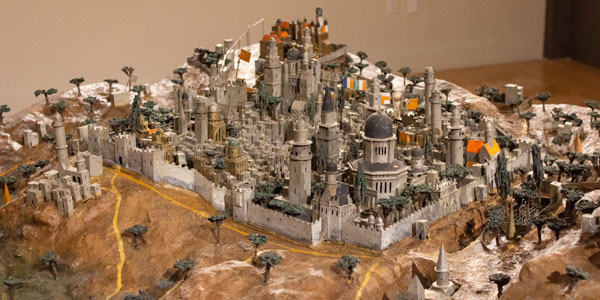 On Sunday, June 24, YUM hosted an unveiling of the refurbished model in a private event. Khan, surrounded by her sons, daughters and grandchildren as well as family friends, explained that her father came into possession of the model as payment from a patient who had no money. Kraus accepted it, but he hadn’t expected a truck to arrive at his door with a box 53 inches square, and no one knew how the patient (who has never been identified) ended up with Kernoosh’s artwork. Somehow, Kraus got the model down into the basement, then donated it to AJHS on November 25, 1974.

Khan spoke movingly about how this project fits into her lifelong effort to understand her relationship to her German Jewish father and her connection to both her Jewish heritage and Israel. “I look at this object,” she said, “as a connection to my past, to my father, to my heritage, and something that I want to pass on to my children and grandchildren.”

Christina Krumrine, the objects conservator hired to revive the model, then took the audience on a literal inside look at what she did to stabilize and renew this mysterious object. Using slides taken during the process, she described how she had to take the model apart to get at the inside lattice-work and the underside of the materials used to create the model. These materials included fiberboard infused with glue laid over the lattice-work to create the “ground” of the city and a sheet of lead that held the city proper and to which the buildings were affixed.

She also described having to rebuild parts of the model that had been ruined in a previous restoration and to replace some of the materials that had separated, curled or been torn. Her work also included a lot of attention to detail, like touching up the paints and creating four new trees to replace ones that had been lost.

After the presentation, the audience went to view the restored model itself, and Krumrine answered questions and offered more information as the viewers got the chance to have a close look at Jerusalem of the 1870s.

YU Museum continues to search for more information about the history of the model and the man who made it. If anyone has information, please get in touch with Bonni-Dara Michaels at 212.294.8330 x 8815 or bdmichaels@yum.cjh.org.