On May 4, 29 students at Yeshiva University’s Sy Syms School of Business were joined by their parents and faculty in Belfer Hall to celebrate their induction into the school’s inaugural chapter of Beta Gamma Sigma (BGS).

Established over a century ago, Beta Gamma Sigma is a scholastic honor society for students who have shown exceptional academic achievement in the study of business. For a business school to have a BGS Society, it must be accredited by the Association to Advance Collegiate Schools of Business (AACSB), which Sy Syms earned in 2013.

Explaining that the Greek letters beta, gamma and sigma represent “honor,” “wisdom” and “earnestness,” Sy Syms Dean Moses Pava pointed out how fitting it was for the school to be connected to BGS and its values: “These virtues have a pride and place in Judaism—we have been talking about them for thousands of years,” he said.

Talia Eisenmann, mother of Moishi Eisenmann ’16SB, flew from their native Holland to watch her son receive his award. As he posed for a picture, she said, “I am very proud of him.” 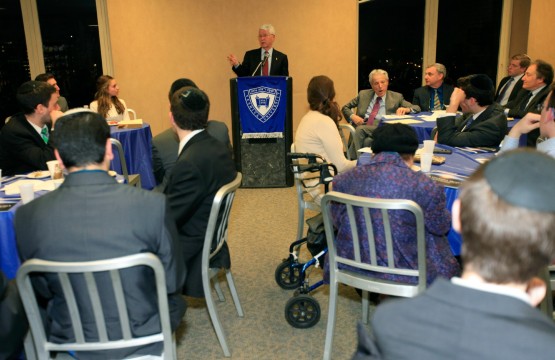 Students were equally excited to become lifetime members of BGS, looking forward to the many opportunities it will afford them. “A big advantage of being a part of BGS is the fact that they have such a huge network around the world and you can make tons of connections with all these interesting people,” said Steven Glatt ’16SB.

The event concluded with each of the students being presented with their BGS award and pin. Looking forward to BGS’s impact on campus for years to come, Associate Chair of the Accounting Department Rabbi Joel Hochman said, “At Yeshiva University, we aspire toward excellence. Let’s keep the streak running for future generations.”

The author, Ilan Brownstein, is a junior in Sy Syms School of Business, majoring in marketing.