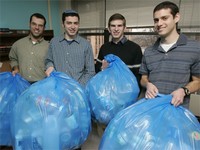 Apr 9, 2008 — At 10:30 pm every Wednesday night, Yeshiva University student volunteers climb aboard large scales holding bags filled with glass and plastic bottles and cans. They subtract their body weight from the total and record the figures. This ritual is an integral part of YU’s participation in RecycleMania, a 10-week, national recycling competition between college campuses. The competition, which runs from January 30 through April 9, involves over 400 schools and seeks to motivate campus communities to recycle more and reduce overall waste.

“We joined the competition, because we wanted to do something unique. We didn’t want to just bring in a speaker,” said Uri Westrich, a junior at Yeshiva College who is co-president of the Environmental and Energy Club with Nava Billet on the Beren campus. “This is an interactive way that people can get involved on a day-to-day basis from their dorm rooms.”

To encourage participation, the club joined together with the Office of University Housing and Residence Life to institute an internal competition as well. Each month during the contest, first and second place prizes are awarded to the dormitory floors on either the Wilf or Beren Campuses that have collected the most recycling. At the end of the entire competition, the winning campus will also receive an award.

Volunteers on both campuses cover one or two dormitory floors and gather the week’s recycling from every room. The total recycling for each floor is weighed and divided by the number of residents. The seventh floor of Rubin Hall on Wilf won first place for the month of February, and the fifth floor of Brookdale Residence Hall on Beren came in second place. The ninth floor of Brookdale gathered the highest weekly total so far, collecting more than 250 pounds of recycling.

This is the first year that Yeshiva University is competing in RecycleMania and the organizers hope to expand it in the future to include the Independent Housing Project (IHP) and YU’s other campuses.

“The competition is a great way to build excitement about recycling,” said Jonathan Mantell, the director of university housing and residence life. “It motivates students to care about the environment in an innovative way.”