Yeshiva University’s Bernard Revel Graduate School of Jewish Studies and Bar-Ilan University hosted the second conference of a two-part international lecture series to mark the 20th anniversary of the passing of Rabbi Joseph B. Soloveitchik, the leading rabbi, Talmudist and philosopher known as “the Rav.” Titled “Reflections on the Thought and Scholarship of Rabbi Joseph B. Soloveitchik,” the conference brought more than 70 people from around the world together to share new perspectives on Rabbi Soloveitchik’s writings, talk about possible influences in his work and discuss new directions for future scholarship on the Rav.

Dov Schwartz, chair of the philosophy department and graduate program for the study of contemporary Judaism at Bar-Ilan and its Natali and Isidor Friedman Chair on Teaching the Writings of Joseph Dov Soloveitchik, envisioned the conference as a means to connect the two centers of the most relevance to the study of Rabbi Soloveitchik: YU, where much of his work was done, and Bar-Ilan, the center of scholarship about him in Israel. “I wanted us to share the innovative research that has been done over the past few years,” said Schwartz.

Schwartz organized the second conference together with Ephraim Kanarfogel, YU’s E. Billi Ivry Professor of Jewish History at Revel; Avi Sagi, professor of philosophy and founder and director of the Interdisciplinary Graduate Program in Hermeneutics and Cultural Studies at Bar-Ilan; and David Shatz, professor of philosophy at YU. The first conference, held at Bar-Ilan on July 17, featured talks on the Rav’s thought, methods of biblical and halakhic interpretation, and the implications of his teachings for educational settings. Presentations at both conferences will be collected in an upcoming volume of scholarship on the Rav.

“It has been a privilege and a pleasure to collaborate with Bar-Ilan on a conference that highlights the Rav, whose learning and published work took shape in large measure at YU and are now known the world over,” said Kanarfogel. “The important findings that will result from both phases of this joint conference, and from the volume of papers that will be published, will hopefully constitute a fitting tribute to the Rav’s learning and scholarship and serve to underscore the prominent place that Revel and Yeshiva occupy on the international scene in Jewish studies.”

YU Chancellor Rabbi Dr. Norman Lamm, a close disciple of the Rav, found the conference an intriguing insight into the study of the Rav’s works. “The fact that so many different scholars from so many different backgrounds came together to think about the Rav in an intelligent way is a tribute to him, his talmidim and his expositors,” he said. 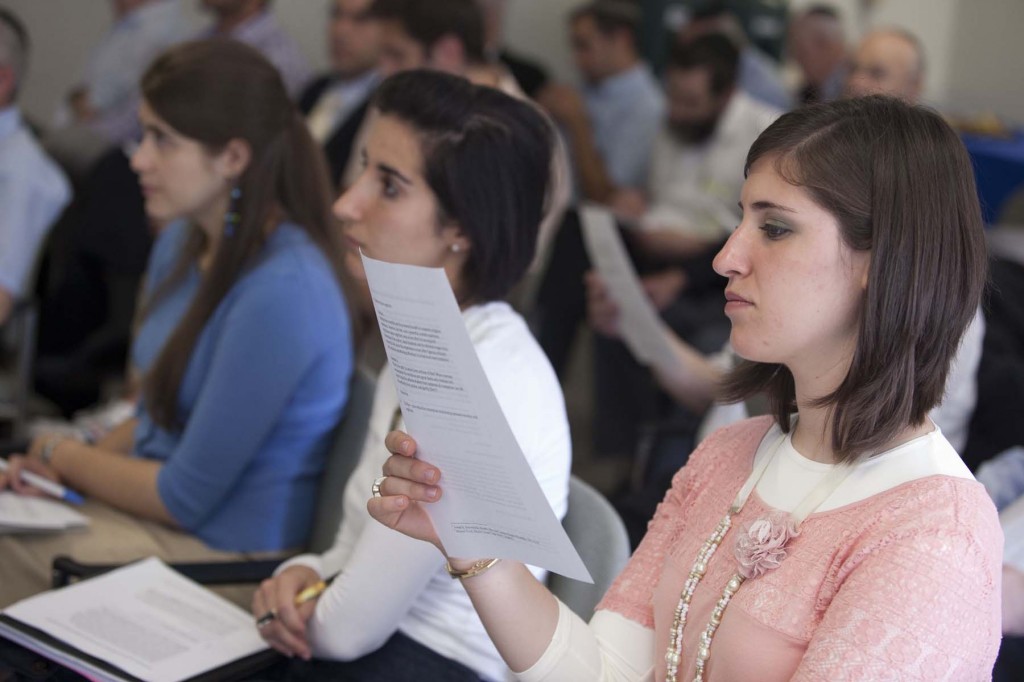 “Attending the conference gave me the chance to reconnect with my studies in Jewish philosophy, as well as to hear some of the foremost scholars of the Rav present their insights,” said Sarah Medved ’11BR. “As a Revel alumna, I felt honored to be included as a participant among my professors and other distinguished personalities in the field and I enjoyed gaining new perspectives into the work of a thinker and leader who looms so large in both my personal and our communal milieu.”

According to Shatz, although much work has been done on Rabbi Soloveitchik’s use of general culture, future scholarship on his philosophical writings would benefit from further exploration of his relationship to certain Jewish thinkers, as well from as an examination of how ideas and figures were presented during his university study in Berlin. However, Shatz felt the irresistible pull of Rabbi Soloveitchik’s work would endure. Noting that both non-Jewish and Jewish scholars have shown a deep interest in the Rav’s thought, Shatz explained, “He had an extraordinary mind that penetrated deeply not only into the Jewish psyche, but into the universal religious psyche, and he described these in both vivid imagery and abstract formulations that were exactly on target.”

I just want to tell you that I am beginner to blogging and certainly enjoyed this web blog. More than likely I’m going to bookmark your blog post . You certainly come with terrific writings. Thanks for revealing your blog.

I just want to tell you that I am just new to blogs and actually savored this blog site. Very likely I’m likely to bookmark your blog post . You amazingly have outstanding article content. With thanks for sharing your blog.

I simply want to say I am just all new to blogging and site-building and certainly savored your page. Almost certainly I’m want to bookmark your website . You surely have outstanding articles. Appreciate it for revealing your website page.

I simply want to tell you that I am just beginner to blogging and seriously loved your website. Most likely I’m going to bookmark your blog post . You absolutely come with really good posts. Many thanks for sharing your webpage.

I just want to say I’m beginner to blogging and site-building and absolutely savored this web site. Probably I’m likely to bookmark your website . You amazingly have great articles. Thank you for revealing your web site.

I just want to mention I am just very new to weblog and truly savored this blog site. Probably I’m likely to bookmark your site . You really come with good posts. Cheers for sharing your website page.

I simply want to tell you that I’m beginner to blogs and absolutely enjoyed you’re web page. Most likely I’m planning to bookmark your blog . You surely have exceptional articles and reviews. Cheers for sharing with us your website.

I just want to mention I’m beginner to blogging and honestly enjoyed you’re web site. Probably I’m going to bookmark your website . You really have tremendous articles. Appreciate it for revealing your web page.

I simply want to tell you that I am just new to blogging and site-building and definitely savored your web site. Probably I’m likely to bookmark your blog . You absolutely come with terrific writings. Thanks a lot for sharing your website.

I simply want to tell you that I am just new to blogs and definitely enjoyed you’re web blog. Probably I’m going to bookmark your blog post . You surely come with good posts. Thank you for revealing your webpage.

I just want to mention I am beginner to blogging and honestly liked your web-site. Probably I’m want to bookmark your blog . You definitely have great articles. Regards for sharing with us your web site.

I simply want to tell you that I’m all new to weblog and really liked you’re website. Probably I’m going to bookmark your website . You certainly come with wonderful article content. With thanks for sharing your webpage.

I simply want to say I’m beginner to weblog and certainly enjoyed this web blog. Very likely I’m planning to bookmark your blog post . You absolutely have fabulous posts. Thank you for revealing your website page.

I just want to tell you that I am all new to blogging and site-building and seriously loved this web page. More than likely I’m want to bookmark your blog . You certainly have remarkable stories. Regards for sharing with us your website.

I just want to tell you that I’m beginner to blogging and actually loved this page. Very likely I’m want to bookmark your site . You amazingly come with impressive stories. With thanks for revealing your webpage.

I simply want to say I’m all new to blogging and certainly savored you’re blog. Most likely I’m going to bookmark your website . You actually come with wonderful stories. Appreciate it for sharing your web site.