Marvin Hershkowitz ’52YC, who passed away on May 4, 2020, will forever be remembered as a star both on the court and off, a hard-working and popular presence on campus, both a legend and true mensch.

He was the first basketball player in YU history to score 1,000 points. From 1954­ to 1956, he served as assistant coach, and from 1956­ to 1957, as assistant athletic director. Six decades later, Hershkowitz is ranked 26th in team history in total points scored, with 1,095, and was included in the inaugural class of athletes inducted into the Maccabees Hall of Fame in 2017. 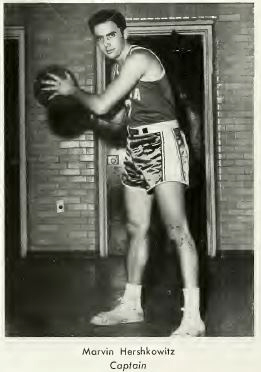 Even before he came to YU, he was known for his basketball talent, having been a former all-city selection at DeWitt Clinton High School who transferred to YU after a successful freshman season at City College of New York, then one of the top basketball schools in the country. YU’s legendary coach, Bernard “Red” Sarachek, had heard how this rising star wanted to come to YU, even though he had a minimal Hebrew background, and he approached Dr. Samuel Belkin, YU’s president at the time, to see if some sort of accommodation could be made for the young man. Dr. Belkin, in turn, approached Rabbi Moshe Besdin, a faculty member at the University, and asked him to start a program for young men like Hershkowitz, paving the way for the creation of the Jewish Studies Program, the precursor to the James Striar School of General Jewish Studies (JSS).

Dr. Jeffrey S. Gurock, the Libby M. Klaperman Professor of Jewish History at Yeshiva College and a former assistant basketball coach, described in his book, Judaism’s Encounter with American Sports, how Hershkowitz paved the way for other basketball players in America to come to the University even though they were not products of yeshivas.

In the 1960s and 1970s, through his work in many leagues and camps, he influenced hundreds of young people with his professional coaching skills. After he made aliyah in 1977, Hershkowitz became the administrative director of Yeshivat HaDarom in Rehovot, Israel. While there, he met Yossy Gev, in whom Hershkowitz saw great potential athletically, academically and religiously, and he convinced Yossy to attend YU. Yossy completed his career in the Macs as the highest scoring player ever and was inducted into the inaugural .

Having had the privilege of a 60-year friendship with Hershkowitz, Dr. Gurock said, “His commitment to becoming an observant Orthodox Jew inspired the creation of JSS. This alone makes him one of our most iconic alumni.”