Prominent Women in Medicine, Law and Business But a Shortage of Scientists, Mathematicians and Engineers 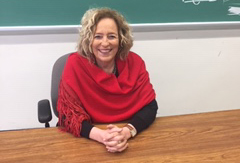 On Wednesday, March 27, 2019, Dr. Mina Teicher explored the questions about why there is a persistent under-representation of women in what are commonly called STEM fields (science, technology, engineering and mathematics) with students at Stern College for Women.

An internationally renowned scientist, Dr. Teicher has been active throughout her career in promoting gender equality in science and technology. She is a member of the Department of Mathematics and part of the Gonda Brain Research Center at Israel’s Bar-Ilan University as well as the director of the Emmy Noether Institute for Mathematics, and from 2005 to 2007, she served as Chief Scientist of Israel. Currently a visiting professor at YU through Spring 2019, her graduate course in applied mathematics touches upon neuroscience, cybersecurity, architecture and financial markets. In the words of Dr. Marian Gidea, the chair of the mathematics department at Stern College, Dr. Teicher is “a role model as well as an active promoter of women in mathematics.” 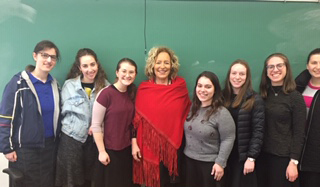 In an engrossing lecture that touched upon her own experiences as a barrier-breaking mathematician, Dr. Teicher discussed the social hurdles that continue to slow women’s progress in STEM, from entrenched stereotypes and gender bias to the sometimes uncompromising climate of science departments in universities worldwide. She cautioned her audience to beware of specific obstacles that could impede the movement of their careers from entry-level to leadership positions, including limitations that might be self-imposed. “Too many 15-year-old girls want to hide their facility in math or science for fear of being branded a nerd,” she observed. “And how many women in their twenties convince themselves that they can’t have children and a demanding career?”

Throughout her lecture, Dr. Teicher emphasized the need for stronger institutional supports to help women balance family and career so that women can become better represented not only in STEM fields but in every field. She underscored the impact that female role models can have: “There’s an infinite demand for women in STEM, but for the number to grow, women need to see other women succeed.”

Dr. Teicher noted that even though STEM provides a rewarding career path regardless of gender, the returns on the investment of their time can be higher for women because they will be attaining goals that have historically eluded them: long-standing employment, high income, economic independence, and the opportunity to significantly contribute to society at large.