Avi Lauer, vice president for legal affairs, secretary and general counsel at Yeshiva University, who emceed the evening, shared his own family’s history of having had their property confiscated by the Nazis, and he praised Spiegler for the work he is doing. “Howard is one of the attorneys who makes attorneys look good because he’s using his amazing skills for such an important cause.”

Lauer also praised the Office of Alumni Affairs for the networking opportunities they have put together where alumni from many different industries and fields can come together to share knowledge, contacts and support. “Our alumni networking groups,” said Lauer, “such as the Legal Professionals or the Wall Street Group, not only offer superb opportunities for individuals to create lifelong productive partnerships but also reaffirm why so many people, alumni and non-alumni alike, treasure how Yeshiva University imbues its graduates with the kinds of values and skills that make the world a better place for all of us.”

Spiegler began with the story of Jacques Goudstikker, a Jewish Dutch art dealer forced to leave some 1,300 paintings behind when the Nazis invaded Holland in 1940. He died while enroute to England, leaving behind his wife, Desirée Louise Anna Ernestina von Halban (otherwise known as Desi), and the paintings, unprotected, were stolen by the Nazis. 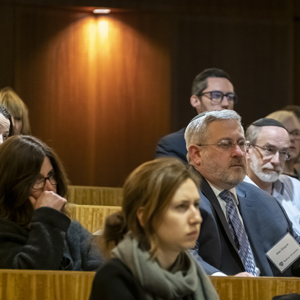 After the war, through the work of groups like the Monuments Men (heroized in a movie directed by George Clooney), many stolen artworks were returned. However, the United States and others working to recover the art did not want to establish a system of restitution, eager to demobilize and go home. Instead, the artwork was delivered to the governments of the original owners, leaving it up to the governments to establish their own programs.

Many governments decided to either hold onto the works or make it incredibly difficult for owners to recover their stolen property. Spiegler pointed out that in addition to the bureaucratic hurdles thrown up by the governments were the emotional obstacles faced by traumatized families, many of whom decided not to pursue their claims in order to get on with their lives.

About 20 years ago, said Spiegler, the descendants of these families, not burdened by historical memory or personal shame, decided to pursue justice through the courts. In addition, national and international laws began to change that made it easier (though it is never an easy process) to establish their claims, such as the Holocaust Expropriated Art Recovery Act of 2016 and the principles articulated in the Washington Conference in 1998.

Spiegler and his firm, Herrick Feinstein, are in the thick of these efforts. Not only was Spiegler involved in forcing the Dutch government to restore 200 works to the Goudstikker heirs, he helped settle long-standing litigation brought on behalf of the Estate of Lea Bondi Jaray to recover Egon Schiele’s “Portrait of Wally.” 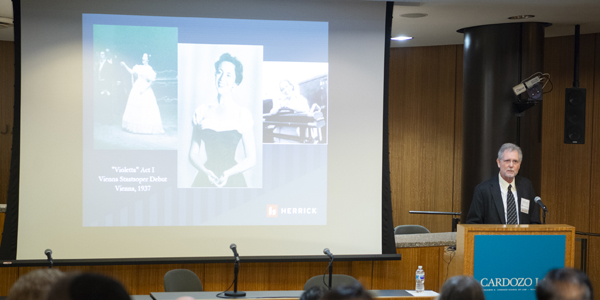 This work of restitution is ongoing and densely litigated, and sometimes the efforts fail. “But let us not forget,” said Spiegler, “that the art works are being recovered for the heirs of their true owners, that they were taken away from them by the murderers of the Third Reich, often in the course of carrying out the Final Solution. Heinrich Himmler once declared that the Nazis had to kill all the Jews because, if not, ‘their grandchildren will ask for their property back.’ We are very proud to say that we’ve helped to prove Herr Himmler quite correct.”