Last week, Dr. David Berger, professor of Jewish history and dean of the Bernard Revel Graduate School of Jewish Studies of Yeshiva University, participated in a historic encounter with Pope Francis at the Vatican. 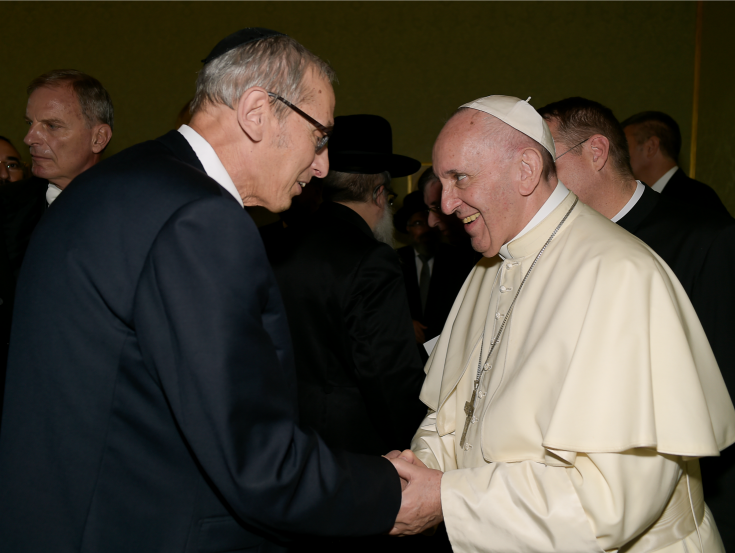 Berger was a member of a delegation of Orthodox rabbis representing the Rabbinical Council of America (RCA), the Conference of European Rabbis, and the Chief Rabbinate of Israel who presented the Pope with a document on Jewish attitudes toward Christianity endorsed by the three organizations, entitled “Between Jerusalem and Rome: Reflections on Fifty Years of Nostra Aetate.” This is the first formal statement on Christianity and Christian-Jewish relations issued by the organized Orthodox rabbinate, and by arranging an audience with the Pope, the Church signaled its recognition of the significance of this moment.

“In following guidelines established by Rabbi Joseph B. Soloveitchik, Orthodox participants in Jewish-Christian dialogue have always faced a daunting challenge: we need to avoid primarily theological exchanges while engaging the moral values and pragmatic challenges facing society at large and religion in particular,” said Berger. “This document expresses an uncompromising stand in matters of faith while recognizing Christianity’s affirmation of the God of the Hebrew Bible and expressing appreciation for the significant strides made by the Church in formulating a dramatically more positive stance on Jews and Judaism. It emphasizes the common values that we share and looks to a future where we can work together to further those values.”

He added, “It is no small achievement that three Orthodox rabbinic organizations could agree on a statement that addresses so complex and controversial a topic. The meeting at which the document was presented to the Pope is a milestone in Jewish-Christian relations.”

Berger traveled to Rome with Rabbi Mark Dratch, the executive director of the RCA, who, like Berger, was ordained by the Rabbi Isaac Elchanan Theological Seminary (RIETS). All three signatories on behalf of the RCA were alumni of the school, including Berger, who serves as senior advisor on interfaith affairs at the RCA, and Rabbi Elazar Muskin, current president of the organization and a recipient of rabbinic ordination from RIETS who also holds a master’s degree from Revel. Rabbi Shalom Baum, also ordained by RIETS, was president of the RCA when the document was prepared and served on the committee that composed it.

The document itself began its journey in 2015 in connection with the 50th anniversary of the landmark statement on the Jews issued by the Second Vatican council. Rabbi Arie Folger, the author of the initial draft and the driving force behind the entire process, is also the recipient of rabbinic ordination from RIETS. Representing the Conference of European Rabbis, he is now the chief rabbi of Vienna. He invited Berger to serve on the committee to hone the document. This led to an intense involvement that left a significant mark on the final formulation.

“Between Jerusalem and Rome” addresses the troubled history of the Jewish experience under Christendom and proceeds to an account of the steps taken by the Church to reverse its stance in the half-century since the Second Vatican Council.   It stresses essential doctrinal differences that “cannot be debated or negotiated,” but goes on to emphasize that “some of Judaism’s highest authorities have asserted that Christians maintain a special status because they worship the Creator of Heaven and Earth Who liberated the people of Israel from Egyptian bondage and Who exercises providence over all creation.” Moreover, it points to shared values and calls for a partnership “to assure the future of religious freedom, to foster the moral principles of our faiths, particularly the sanctity of life and the significance of the traditional family, and to cultivate the moral and religious conscience of society.” This call includes joint efforts to combat anti-Semitism and religious extremism.

According to Berger, the warm reception of this initiative by the Church is an important step in the right direction. “It provides grounds for optimism that such a partnership can be nurtured successfully and achieve at least partial success in meeting these ambitious goals,” he said.