The Bernard Revel Graduate School of Jewish Studies hosted Norman Stillman, an internationally recognized authority on the history and culture of the Islamic world and on Sephardi and Oriental Jewry, on Wednesday, November 3. Stilmman is the Schusterman/Josey Professor of Judaic History at the University of Oklahoma and has authored seven books and numerous articles in several languages.

As part of his visit to Yeshiva University, Stillman met with Revel PhD students at a special luncheon where he spoke about “The Path to a Life Studying the Jews of the Islamic World: Studying under Shlomo Dov Goiten.”

The day also included a dinner discussion with Revel faculty members on “Why Did We Need Another Reference Work? The Encyclopedia of Jews in the Islamic World” and a public lecture on “Morrocan Jewry in Modern Times: Orientations and Reorientations.” 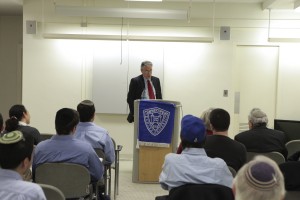 “Prof. Stillman not only provided the intellectual stimulation that comes with the presence of a distinguished scholar, he conveyed to our doctoral students the experience of working with Shelomo Dov Goitein, one of the most significant Jewish scholars of the twentieth century,” said David Berger, dean and Ruth and I. Lewis Gordon Professor of Jewish History at Revel. “His presence also underscored that fact that with the recent hires of Prof. Daniel Tsadik in the field of Iranian Jewry as well as Jews in the Arabic speaking Islamic world and of Prof. Ronnie Perelis in the field of Sephardic Jewry in the Christian world, Revel now has one of the strongest programs in Sephardic history in the United States.”