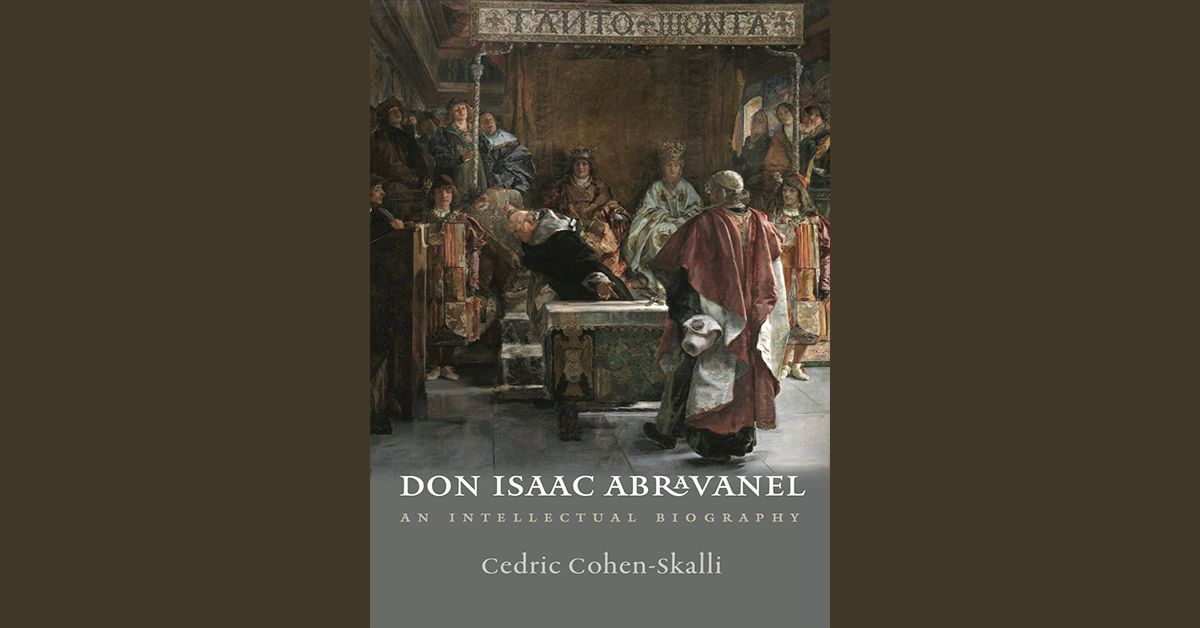 Cedric Cohen-Skalli’s Don Isaac Abravanel: An Intellectual Biography is a masterful biography of the renowned statesman and commentator. The author, a professor at the University of Haifa, skillfully traces both Abravanel’s political career as well as his contributions to Jewish biblical interpretation.

Abravanel (1437-1508) played an active role in courts in Portugal, Castile, Naples, and Venice, bringing him into close contact with, as Cohen-Skalli describes, “great developments, innovations, and crises in the realms of economics, politics, religion, literature, philosophy, and geography.”

Not simply a court official and merchant who participated in the political and economic dynamic of his time, Abravanel was an author and scholar who made a crucial impact on the Jewish communities in Italy and the Sephardic diaspora, serving both noblemen and kings. His education included knowledge of Christian, Islamic, and classical literature (in his Portuguese and Hebrew writings, the book notes, Abravanel liberally quotes Seneca and Cicero alongside medieval sources). He composed commentaries on the Bible, rabbinic texts, Maimonides’s Guide of the Perplexed, and various philosophical works.

In considering that scholarship has viewed Abravanel as prefiguring the modern Jew of the eighteenth and nineteenth centuries, Cohen-Skalli wonders, “Was Don Isaac a hero who defended Judaism and Jews as the modern era dawned, perhaps protecting Judaism from modernity itself? Or perhaps was he a Jew imbued with the spirit of modernity (or early modernity), who internalized new conceptions and new modes of behavior and expression?”

Abravanel traced his roots to an illustrious but complicated family. His ancestors, he claimed, had resided in Seville ever since the destruction of the First Temple. But subject to persecution and a wave of mass conversions to Christianity, his relative Samuel Abravanel converted out of the Jewish faith. Isaac’s father Judah was a prominent merchant in close contact with the king. In considering his own place in the history of his people, Don Isaac identified with the elders of the Bible. Unlike Moses, who Maimonides identified with, Abravanel viewed himself as a learned Jewish nobleman, not a solitary national leader.

Cohen-Skalli is as skilled discussing Abravanel’s rollercoaster political career (he more than once had to flee for his life, rising and falling out of favor in the courts, including after 46 years in the kingdom of Portugal) as he is in articulating Abravanel’s philosophy. In considering Don Isaac’s philosophy of history, Cohen-Skalli writes, “the neo-Stoic conception identifies in the ebbs and tides of personal and collective fate the hand of external natural causes, factors that lie beyond our control, so Abravanel conceives of the waxing and waning fortunes of the Jews through history as a circular motion approaching and leaving the center of providence (the land of Israel)—a process that also cannot be influenced.”

Just as skillfully, Cohen-Skalli mines Abravanel’s exegetical writing as it reflects the context of its composition. In detailing Abravanel’s description of the destroyed Temple, the author sees a spiritual leader offering both solace and hope. As he writes:

Facing the destruction of Spanish Jewry, Don Isaac offers an account of the Temple’s beauty and grandeur. In contrast to the abandoned home of the Spanish exile, the Christian churches appeared to be at the height of their power and glory. Nevertheless, the exegete can disinter the Temple’s long-lost greatness and represent it within the imagination of the exiles as a tangible and beneficial religious alternative to Christianity. We can thus understand the breadth of Don Isaac’s discussions as an attempt to give his reader an important experience: to spend as much time as possible in the Temple by delving into the details of its dimensions and construction. It is a literary tour, reestablishing for the reader the messianic link between the Temple’s ancient glory and the future glory of a temple still to come. Thus, the Spanish Jewish exile is given a religious edifice of its own and he can see in the destruction of his community a way station on the path to a messianic redemption.

Don Isaac Abravanel: An Intellectual Biography is a rich, comprehensive, and rewarding biography. It adeptly situates Abravanel’s writings within his career and the wider political happenings of their composition and offers a nuanced portrait of the man. The reader will no doubt be grateful for having gained a deeper understanding of the life and times of Judaism’s most celebrated learned nobleman.