On June 26, Yeshiva University honored Professor Ronald Rubin ’57YUHS at YU Libraries, in a special reception organized in recognition and appreciation of his many gifts to YU in recent years, including his gifts to the Mendel Gottesman Library’s rare collections. At the reception, Rubin received a framed certificate marking and commemorating his contributions to the University. 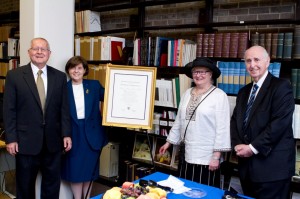 Rubin’s most recent gifts to the YU Libraries include a beautifully-bound, four volume Biblia Rabbinica (Mikra’ot Gedolot, 6th ed.) published in Basel in 1618-1619 and commissioned by the Christian Hebraist Johannes Buxtorf.

Rubin officially donated the Biblia Hebraica back in April, in honor of a significant birthday he was celebrating. He first became a patron of the YU Libraries four years ago, when he began contributing rare items to its collection. These items include a series of bound volumes of American newspapers from the early 1800s and a deed signed by former Texas governor George T. Wood, granting a tract of land near Austin to Jacob de Cordova, a Jew who settled in the Republic of Texas in 1837. By 1848, de Cardova ran one of the largest land agencies in Texas. Rubin has also donated to YU-affiliated Rabbi Isaac Elchanan Theological Seminary and recently dedicated a room in the Jacob and Dreizel Glueck Center.