At the annual meeting of the Society of Biblical Literature in November in Boston, MA, Dr. Moshe Bernstein ’62YUHS, ’66YC, ’69R, ’69BR , The David A. and Fannie M. Denenberg Chair in Biblical Studies, was presented with a Festschrift titled HĀ-‘ÎSH MŌSHE: Studies in Scriptural Interpretation in the Dead Sea Scrolls and Related Literature in Honor of Moshe J. Bernstein (Brill). The book, featuring 19 essays related to his work in biblical interpretation in antiquity (a bibliography of which runs eight single-spaced pages), was edited by Binyamin Goldstein (currently a PhD student at Bernard Revel Graduate School of Jewish Studies), Michael Segal ’93YC, Father Takeji Otsuki Professor of Bible at the Hebrew University of Jerusalem; and Dr. George Brooke, Rylands Professor of Biblical Criticism and Exegesis Emeritus at the University of Manchester. 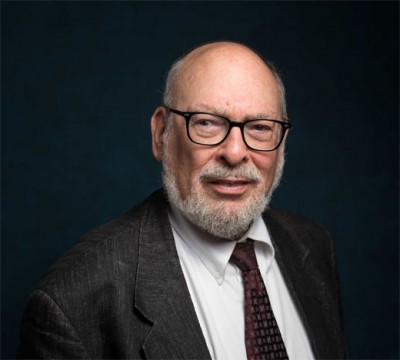 At the presentation ceremony, Segal spoke movingly about Bernstein’s influence as a teacher. “His interest in his students is not limited to their university education both in and out of the classroom,” he noted, “but he also has a devotion to them years after they were formally enrolled in his courses. This has been a source of inspiration to me and all those who were his beneficiaries as we now have our own students.” He went on to say that “a Festschrift is a labor of love, and this volume is a token of our affection for you.”

Brooke concurred with Segal’s assessment, and said “that this volume not only honors Moshe as a lover of texts but also that he engages with texts the way he engages with people, in a thorough and empathetic way that brings out their richness and depth.”

According to Dr. Aaron Koller ’01YC, ’09BR, ’10BR, chair of the Robert M. Beren Department of Jewish Studies and associate professor of Bible, the volume showcases two of the central elements of Bernstein’s career. “On the one hand,” Koller explained, “he is a scholar of international renown recognized as an authority in his fields. On the other hand, he devotes a remarkable amount of time and effort to his students at YU, bringing his erudition and energy to every class and showing students the wonders of scholarship on Jewish texts. HĀ-‘ÎSH MŌSHE truly puts YU Jewish studies on the global stage of scholarship.”

Bernstein was both delighted and humbled by the presentation, a point he made in reference to the book’s title.  “The phrase ‘Hā-‘Îsh Mōshe,’ translated as ‘this man Moses,’ occurs only twice in the Torah,” he explained. “In Numbers 12:3, Moses is referred to as ‘humble,’ while in Exodus 11:3, he is called ‘great’ in the land of Egypt. Now, I don’t know about the ‘great,’” he laughed, “though I am proud of the scholarship that I have done, but I certainly do feel gratified by this honor given to my work and teaching.”

Bernstein is already hard at work on several projects during his current sabbatical, which include co-editing two collections of Dead Sea Scrolls texts as well as several other research efforts. But while he directs his energy toward deepening and refining the interpretations he draws from his lifelong examination of these ancient manuscripts, his heart is never far from YU. “I bleed Yeshiva blue,” he said, “and Yeshiva University is my home.”