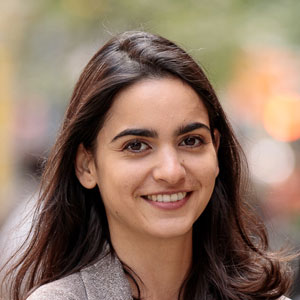 Cecilia Gebruers, who is working on a JSD at the Benjamin N. Cardozo School of Law under the supervision of Dr.Peter Goodrich, director of the program in law and humanities, recently received a fellowship from the American Association of University Women (AAUW) to help her complete her dissertation on how land-grabbing affects the lives of indigenous women in her native Argentina. The AAUW provides fellowships and many other services that help women gain access to educational and economic opportunities, with the mission of advancing gender equity for women and girls through research, education and advocacy.

The legal research she is doing now was not necessarily the destiny she foresaw growing up in Santa Rosa, the capital of the province of La Pampa, Argentina.

When she finished high school, she went to study law at the University of Buenos Aires, in the city of the same name. “It wasn’t an idea I was always convinced about doing, that it was the right career path, and, in fact, I had a ‘crisis’ in the middle of my law degree. To help me deal with that, I decided to study philosophy as well; in between contracts, I’d read some ancient philosophy, which was like fresh air, and I think it actually helped me to finish my law degree.”

The crisis had to do with the fact that Gebruers couldn’t see a clear connection between her study of the law, which in Argentina focused heavily on litigation, and the concepts of justice and virtue that she was exploring in her philosophical reading. “I couldn’t find an application for what I was learning,” she explained. “I didn’t want to litigate, and that was, at that point, the only approach the faculty was giving me.”

But things shifted as she continued to balance her torts and ancient wisdom: “I started meeting people in the law school who were doing political theory, the philosophical basis of the law, and I stayed in touch with them. I worked as a teaching assistant in a political theory course, and I eventually found an environment of colleagues in the law school that would give me that different approach to the law.”

One crucial turning point for her, which integrated her learning about philosophy and law and eventually helped her find her way to Cardozo, was discovering Jacques Derrida, the French Algerian-born philosopher best known for developing a form of analysis known as deconstruction. Among the many things he did in his life, he was a Cardozo Distinguished Scholar in the late 1990s. “I was reading one of his works at a conference about the possibility of justice, and for me it was a revealing text, a way of translating all the philosophy into what you can do with the law to achieve justice. I also noticed that the conference was held here at Cardozo. That was the first time I knew about its existence, and I thought ‘this is a great place with an intellectual community using an interesting approach.’”

After finishing her law degree, she worked for the next four years for Equipo Latinoamericano de Justicia y Género (ELA), an Argentine women’s right organization, whose mission is to improve the social, political and economic situation of women. “In the last year of the degree, I took a class on gender and constitutional law. It turned out that the professor was the executive director of ELA. I really liked that class, and she contacted me when she needed a person to work there.”

While there, Gebruers worked on legal issues related to violence against women, reproductive justice, political participation of women and care work, working her way up from a research assistant to the manager of the organization’s legal department.

As she continued to plan out her future, the name “Cardozo” came back into view. In 2016, with the help of an award from the Fulbright Scholar Program and an International Peace Scholarship from the Philanthropic Educational Organization (or PEO), she came to Cardozo to complete her master’s degree in Comparative Legal Thought.

Her dissertation topic is intersectionality in human rights law and legal theory, focusing on a case study of indigenous women affected by land-grabbing in the context of living in La Pampa. The first phase involves explaining the theoretical background of intersectionality and how it applies to the law and the courts, followed up by field work interviews in La Pampa later in the year.

Intersectionality is an approach to understanding human identity based not on one-dimensional categories (e.g., one is either a male or female, a white person or a black person) but on how the “intersection” of the multiple descriptors of any single human being—a person can be a woman and black and poor and English all the at the same time—creates a person’s identity as well as determines how the world reacts to that identity. Intersectionality is about a constant effort to think about the complexity of identities and the power relationships behind them.

“Intersectionality began as a social movement, with alliances being made among different groups to show that the complexity of identity is, well, complex. Then it became more institutionalized inside the academy in the 1980s and 1990s, and now it’s made its way into the law, with human rights courts incorporating intersectionality into their decisions. My theoretical work is on how this concept is being received by the courts, such as the Inter-American Court of Human Rights, which referenced intersectionality for the first time in a decision made in 2015.”

This line of research also ended up having a personal connection. Focusing on the topic of land-grabbing from indigenous people in La Pampa led her to review the history of the relationship of the country to its indigenous people. “Argentina has a different history in regard to indigenous people from the rest of Latin America,” she explained. “The extermination of indigenous people coupled with an active policy promoting immigration from Europe and eliminating indigenous people from the census—you were a ‘rural person,’ not an indigenous person—resulted in people detaching from their native roots and ancestors.” She began thinking about her own family and their roots because “we always talked about the Belgian and the Ukrainian grandfathers, and I said, ‘Why don’t we talk more about my grandmother who doesn’t have a close connection to any immigrant group?’ I gradually discovered that she was from a settlement of indigenous people unconnected to any immigrant group and who were just considered rural people, peasants, working on the estancias [large estates].”

While the topic of land-grabbing involves technical discussions about laws, contracts and deeds, it also touches upon differing definitions of land ownership depending upon whether one’s cultural history privileges private property, as in Western countries, or communal stewardship, as in many indigenous groups.

In other words, these definitions are intersectional in nature, and companies are taking advantage of the ambiguity of tenants’ land rights in order to buy the land cheaply or simply expropriate it by force (as in Brazil).

“In La Pampa, some indigenous communities were settled on a parcel of land in Colonia Emilio Mitre, and they are now asking for a proper demarcation of the land and their title to it, a right recognized in the Argentine constitution but which is often contested by, say, ranchers who can produce a title and claim ownership of the property. This conflict of laws is also a conflict of definitions, and I will investigate how the conflict affects a specific group of women in a specific place in Argentina.”

At this point, she is not only busy preparing for her October visit to La Pampa and attending the 2018 Critical Legal Conference in September at The Open University in Milton Keynes in the United Kingdom, but also finishing up her internship at the Center for Reproductive Rights. “I wrote up the argument on intersectional discrimination and structural discrimination for the Inter-American Commission on Human Rights concerning a situation of indigenous women suffering from obstetric violence in Peru. Writing the argument forced me to translate the theoretical criticisms I had been making of the Commission into statements that could have a powerful impact when they’re voiced by one of the few organizations that can bring it to the Commission.”

At some point she will have the time and space to figure out the path she wants to follow into the future, but for now “I’m excited by all these challenging opportunities that have come to me. I’m living in one of the most interesting times of my life so far.”
http://credit-n.ru/zaymyi-next.html