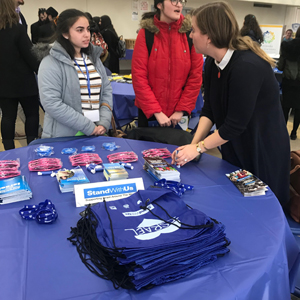 On Tuesday, April 2, 2019, The Simon Wiesenthal Center hosted a High School Leadership Summit that took place at Yeshiva University. Over 130 high school seniors from Jewish high schools in New York and New Jersey learned about the challenges faced by Jewish students on college campuses and how to combat them.

Speakers from the Center talked to the students about what they noted as an increase in anti-Israel and anti-Semitic rhetoric occurring at many universities and the various threats and hostile demonstrations aimed at Jewish students. The students were given helpful and effective techniques to counter these. Melissa Weiss, national campus outreach director at the Center, gave a talk titled “How to Have Difficult Conversations,” which offered students strategies to help them handle tough conversations with friends, classmates and professors. She encouraged students to show they were open minded and wanted to hear the “other side” and not just hear what they wanted to hear. She also encouraged them to be aspirational and to let others know that both sides strive for peace.

Dr. Ari Berman, President of Yeshiva University, greeted the students during the conference, telling the students to “Stand for Torat Emet [The Torah of Truth] and be representatives of Torah values.” He stressed that it is not enough to just fight against attacks against Jews and Israel on college campuses but that students “must stand up proudly for what they believe in and be heard at this crucial time in history.”

A panel titled “Leading the Way” featured three college students who were Wiesenthal Government Advocacy interns. Moderated by Shanee Markovitz ’20S, the panelists spoke about their on-campus experiences, such as how one of the panelists responded to a professor who made positive statements about the Boycott, Divestment and Sanctions movement. They discussed initiatives they took to enact change on their campus and in their communities and took questions from the audience. The students also met with representatives from various Jewish campus organizations such as Stand With Us, MASA Israel Journey and Chabad on Campus to learn about opportunities to be a Jewish leader on campus and how to get involved in Jewish and Israel programming.

Rabbi Dr. Josh Joseph, senior vice president at Yeshiva University, said that “it was truly gratifying for Yeshiva University to host the inaugural Simon Wiesenthal Center High School Leadership Summit on campus anti-Semitism. As part of our aim to educate the leaders of tomorrow, the Center’s conference helped lay the foundation for the next generation of student leaders from a number of forward-thinking high schools who must grapple with new challenges as they embark upon their next journeys.”