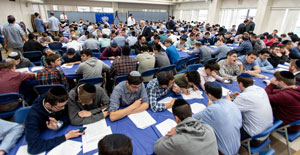 On Monday, October 8, 2018, over 300 students, teachers and staff from the Marsha Stern Talmudical Academy/Yeshiva University High School for Boys (YUHSB) gathered in Furst Hall 501 to finish Mishnayot Seder Nezikin for a Siyum in memory of Ari Fuld ’91YUHS. The Siyum is part of the Hachnasat Sefer Torah, which included a D’var Torah from Rabbi Dr. Ari Berman ’87YUHS, President of Yeshiva University, and dancing the new Torah, the making of which was funded by an anonymous donor, from the 185th Street Plaza into the MTA Beit Medrash.

On September 16, Fuld was mortally wounded near the Rami Levy supermarket in the Gush Etzion junction in Jerusalem. In a message sent to the Yeshiva University community that same day, Dr. Berman stated that “our hearts are torn by the murder of our alumnus Ari Fuld zk”l ’91YUHS in today’s terrorist attack. Ari’s heroic response to capture the terrorist before succumbing to his wounds was emblematic of the courageous approach he took to his life, defending the State of Israel and the Jewish people. Deeply committed to our Torah, people and land, Ari’s sense of mission permeated all that he did and inspired all those with whom he came in contact. His tragic loss shakes us to our very core.”

Some of that sadness occasioned by Ari’s death was lightened by the joyous energy in the room as members of both Fuld’s family and graduating class watched the young men dance, sing and celebrate. Rabbi Josh Kahn, head of school, noted how Ari’s life, like the Sefer Torah, embodied kedushah [holiness], which “can only be created through action, and just as we are commanded to write a Sefer Torah, we are commanded to write our own life story and view our existence with the kedushah of godliness.”

In his comments, Dr. Berman picked up on this theme of living a godly life by focusing on how Ari Fuld practiced charity in whatever ways he could, providing a profound example about how to bring Torah values to life.   He encouraged all those in attendance to consider what values they can draw from the Torah to share with the world, and—as the Sefer Torah is a physical manifestation of God’s speech—to imagine how we ourselves can manifest His values.

After the completion of the Siyum, Rabbi Michael Taubes ’76YUHS, Rosh Yeshiva, gathered the Sefer Torah in his arms and—escorted by a phalanx of hundreds of dancing students and staff—brought it to  its new home in the YUHS Beit Midrash.  (Watch the video.) 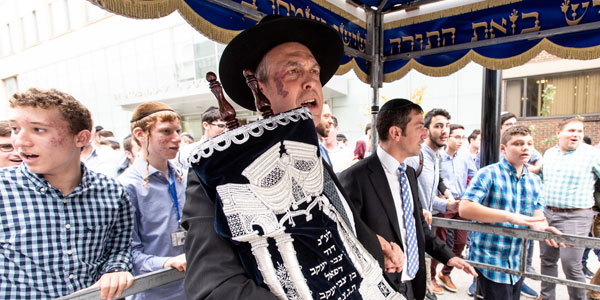