For the final project in his “Social Media to Drive Business Results” course at Yeshiva University’s Stern College for Women, Adjunct Instructor Rob Longert gave students a simple assignment: raise money for a charitable cause by crowdfunding—collecting small amounts of money towards a shared goal from a large group of donors, usually via online platforms—using the social media tools they had learned in his class.

The group knew they had to focus on an achievable goal. They kept their expectations realistic. After meeting to discuss their options, they settled on the case of Sara Bezaley, a young girl from Great Neck, New York, who suffered terrible complications after contracting swine flu at age 7. Liran Weizman, a senior in the class majoring in public relations and psychology, had met Bezaley the year before while volunteering in the hospital where she was being treated and was immediately struck by her determination to fight and thrive. “Thank God, she’s a rock star,” Weizman said.

The class met with Bezaley’s family, created a video and a webpage, and came up with fun but inexpensive perks for donors. Then they launched their campaign, “Open Hearts, Open Doors,” on crowdfunding site Indiegogo and started reaching out via Twitter, Facebook and email. Their goal: $4,000 to make the bathrooms in Bezaley’s home wheelchair accessible. They gave themselves two weeks to raise the money.

In less than 24 hours, the class raised almost twice that.

In another 24, that amount had more than doubled. And the money kept pouring in. 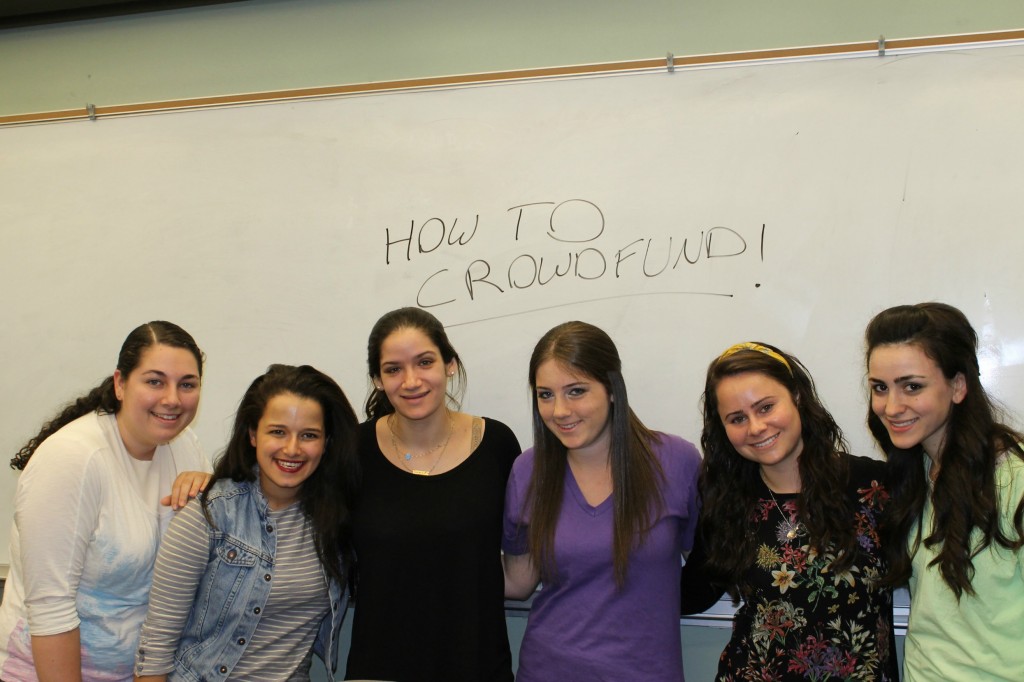 “This started out as just another project with a grade and it became something we’re all so invested in,” said Weizman. “It’s incredible to see how we had this idea and transformed it, with the help of such an amazing team, to create such a huge impact on a wonderful family. I am still so blown away by the people and by the power of social media.” She added, “I think that’s when you know you’re really a team—when it’s no longer about the grade, but about helping this beautiful girl live a better life.”

If the campaign has been astonishingly successful so far, it’s in part because of the way the students integrated what they’d learned in the classroom into their planning and execution, according to Lasson.

“Our professor, Rob, really taught us that it’s not about how many times you post something on Facebook,” she said. “The story has to be compelling and you have to tell the story right. I don’t think this is so much about how many times we posted on social media as it is about the story that we told. I learned in my journalism courses that just because you write the story, that doesn’t mean someone will want to read it—but once we told this one, everyone was talking about it.”

“Our class was designed as a way to teach my students the power of social media by experiencing it firsthand,” said Longert. “We spoke a lot about ‘Conversation Capital,’ a term coined by Bertrand Cesvet, founder and CEO of Sid Lee, a global creative agency, and how to generate experiences that people want to talk about, both online and off. To me the key takeaway is that when a community of people is passionate about something, they want to talk about it and spread the word. It’s been a core value that I’ve taught in my class and we are seeing it come to life right now.”

For Bezaley’s family, the Stern College class’s social media experiment has life-changing implications. With the money the campaign has raised, it’s no longer just about renovating the bathrooms—the family is now planning to make the entire house fully accessible, a prospect that would have been unimaginable just a few weeks ago. To Longert, that kind of impact is indicative of the unique nature of the YU community.

“Both of my class’s campaigns, ‘Open Hearts, Open Doors’ and ‘Three Smiles,’ were launched to help people and support community,” he said. “It speaks to the type of people that are part of Stern and how the leaders of tomorrow are going to think, act and lead.”

The campaign’s success is a lesson in itself, enabling students to learn how to develop pitches to media and how to keep the momentum going once a goal has been reached. “We have a much bigger story to tell now,” said Lasson, who spent most of the morning tweeting major New York papers about the project. “Now it’s not just ‘this great girl needed a house’ anymore. It’s ‘this great girl needed a house, and everyone wanted to help, and now you have to hear how it happened.’”

To make a contribution or to learn more about the project visit www.indiegogo.com/projects/open-hearts-open-doors.