Yeshiva University students joined hundreds of demonstrators gathered at Dag Hammarskjold Plaza across from the United Nations on Thursday, September 22, to protest Durban III, the UN-sponsored conference on racism. Organized by Stand With Us, a coalition of religious and secular groups, the circus-themed rally criticized the conference’s history of evading human rights discussion to focus on anti-Israel and anti-Semitic rhetoric. 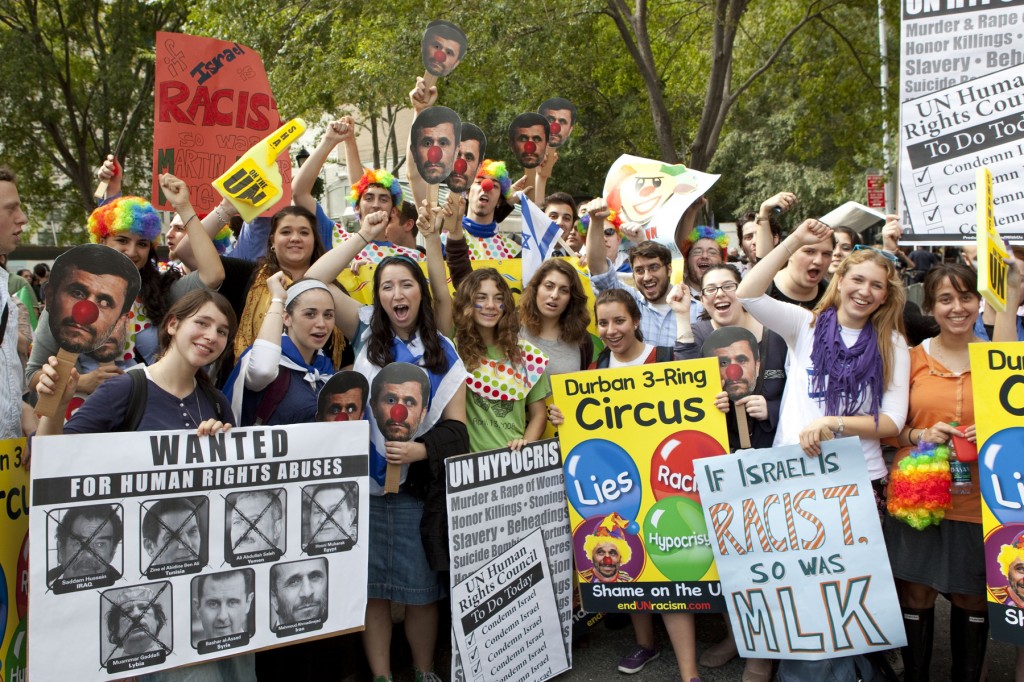 This year’s conference was boycotted by prominent Democratic countries, including the United States, Israel, France, the United Kingdom, Germany, Italy, Australia and Canada.

“It’s ridiculous that there are so many real human rights violations across the globe and this conference is being used to talk about Israel,” said Dena Shayne, a senior at Stern College for Women and part of a delegation of 20 Stern women attending the Non-Government Organization (NGO) Global Summit. A parallel conference to Durban III, the Summit convened NGOs from across the globe to pointedly address human rights issues neglected by the UN Conference.

YU students waved Israeli flags and carried homemade signs crafted two days before at an event organized by YAKUM, a student group that aims to educate young Orthodox Jews to fight anti-Israel and anti-Semitic bias in the media and politics. “They are singling out the only democracy in the Middle East to criticize,” said Simon Goldberg, a senior at Yeshiva College who also attended the NGO Summit. “We have a moral responsibility to expose the lie that is Durban III and make sure the world knows the truth about what Israel stands for.”

Speakers at the rally included Professor Alan Dershowitz of Harvard Law School, who is known for his outspoken views on the Arab-Israeli conflict. In an address to the demonstrators, Dershowitz lamented the “hypocrisy and double standard” of Durban III. “Does no one recognize the need for a single standard of human peace?”

Later in the day, YU students took part in an Open Dialogue Tent at the Plaza. “Our students have a long and proud history of taking a leadership role in activism to defend Israel and the Jewish people,” said Adina Poupko, who works in Stern’s Office of Student Life.

“I was very proud to be standing with YU students who were by far the largest group of college students in attendance,” said Beth Hait, assistant dean of students at Stern. “The theme of the rally was that the UN has become a circus, and I thought to myself, how true—not one world leader has the courage to say that the emperor has no clothes.”