On Sunday, March 27, 2022, more than 230 people jammed the auditorium of the Center for Jewish History in New York for the rollout of the Israelite Samaritans Project of the Yeshiva University Center for Israel Studies (CIS). 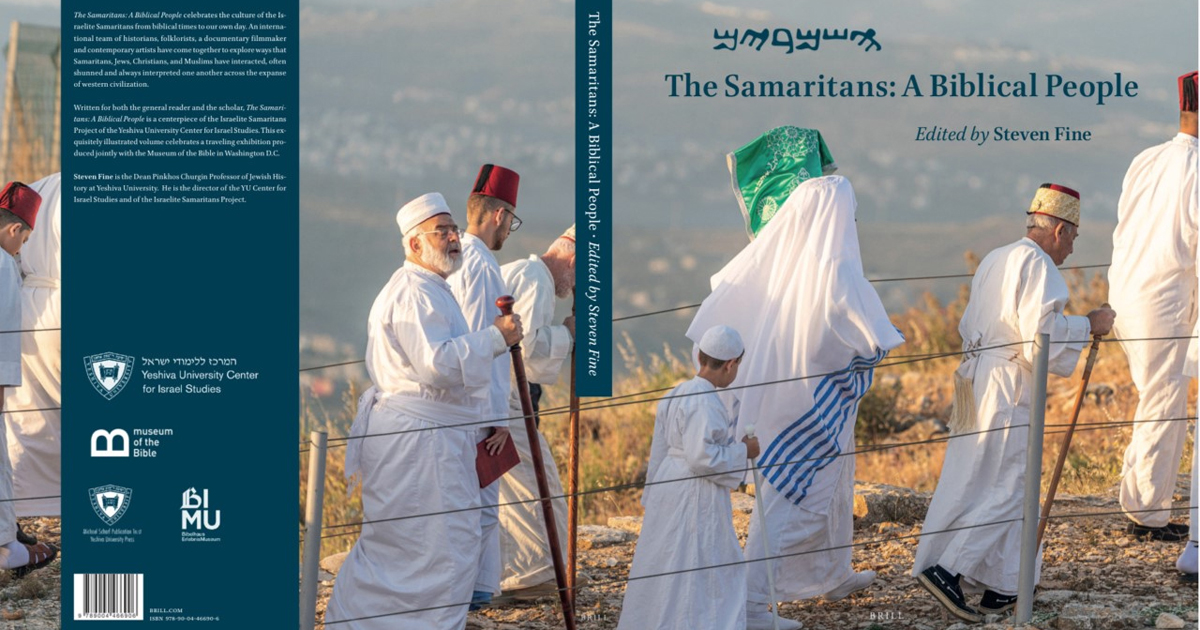 The exquisite book that documents this project, edited by Dr. Steven Fine, director of CIS, premiered for the first time, as did magnificent art produced by members of the Jewish Art Salon.  The centerpiece was the first viewing of a new documentary by Israeli filmmaker Moshe Alafi, The Samaritans: A Biblical People, ha-Shomronim: Edah. Torah. Har.

In his preface to the book, which was published jointly by Brill Academic Publishers and YU Press, YU President Rabbi Dr. Ari Berman writes that “this is YU at its best: harnessing deep scholarship, a broad range of media, educational innovation, complexity, and our hallowed past as we build for the future.”

The high point was the first public showing of the documentary, filmed in Holon, Nablus, Ukraine and at Yeshiva University. Five years of fieldwork have resulted in a deep dive into the cultural world of the Samaritans as they strive to maintain their 3,500-year-old tradition. It is an intimate and compelling insider’s view of the Samaritan struggle against the odds, of their heart-wrenching choices, their joys and sorrows.

This film has already been awarded its first prize.  The Israelite Samaritan Medal is awarded yearly for scholarship and other contributions to Samaritan studies. Dr. Fine  announced that the 2022 award will go to Alafi.

Ilona Moradof, associate director of YU Museum, caught the tenor of the event, writing that “itt was great to see how much the audience enjoyed the movie and the conversation after the movie.”

Responses to the film by prominent cultural figures have been overwhelming. Margaret Olin, an art historian, photographer and culture critic from Yale University wrote, “I’m so glad I came!  It was great to see the artworks. They were good choices.” She added that the “film was startling. I expected to see one of those films that  typically accompanies an exhibition. A straightforward documentary, either in the  travelog genre, or the educational film genre. But instead I got a beautifully made searching documentary film that raises all kinds of issues.”

Helen C. Evans, the Mary and Michael Jaharis Curator of Byzantine Art Emerita, Metropolitan Museum of Art and  an adviser to the YU Israelite Samaritans Project, added that “the film was amazing. I am probably like most who didn’t expect anything as emotionally compelling and really raw. You kept asking if showing the sacrifice of animals would be off putting. Having seen the film, I think the answer is yes and in the best way. I do hope your book, show and the film will get the attention they deserve.”

Henry Abramson, a prominent historian and public historian from Touro University chimed in: “Wow, just wow!   I just wanted to follow up with a note of thanks for your amazing film. The reyd [conversation] in the lobby afterwards was quite intense—my wife and I couldn’t stop talking about it all the way home. It’s a remarkable achievement, and I think it (together with the book) will have significant reverberations in the scholarly world and popular mind.”

A public conversation followed the showing, moderated by Dr. Erica Brown, director of the Rabbi Lord Jonathan Sacks-Herenstein Center for Values and Leadership and vice provost for values and leadership, and including Alafi, Dr. Fine, and Tamar Gan-Zvi, editor of the film. Dr. Brown later wrote that “to me, the sign of an impactful movie is if it lingers with you days later, and I have been thinking and talking about the film since yesterday and will continue to do so. It was a magical afternoon. You have so much to be proud of. The conversation was electrifying.”

Alafi’s documentary, a project of the YU Center for Israel Studies, is made possible by the Leon Charney Legacy Fund of the YU Center for Israel Studies.  It will formally premiere in Israel in August 2023 and then be distributed worldwide. The associated exhibition will open at the Museum of the Bible in September 2022 and at Bibelhaus Museum in Frankfurt, Germany, in February 2023.  The associated book is published jointly by Brill Academic Publishers and YU Press.