The Ken Ludwig Comedy Truly Has Something For Everyone

On Dec. 16, Dec. 17, Dec. 19 and Dec. 20, the Stern College Dramatics Society (SCDS) will perform The Game’s Afoot, the 2012 Edgar Award-winning whodunit comedy by Ken Ludwig and directed by Prof. Reuven Russell. The play promises to have the audience leaving the theater with sore abs and a new appreciation for the talent in the women from midtown Manhattan. 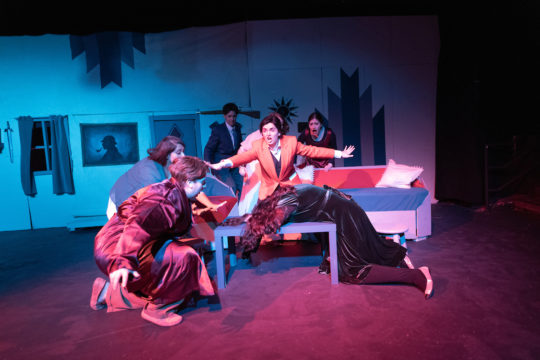 YU News sat down with students from SCDS to discuss the play, the recent changes for SCDS and the rewarding aspects of being involved.

YU News: Tell me a bit about the show.

Shoshy Ciment ’19S (SCDS President, Inspector Harriet Goring): We wanted to do a comedy because we hadn’t done one in so long, and we found this one that we knew is really funny, unique, and yes, would be challenging, but we were ready for it. Something unique about this show is that while there is a lead and the action is centered around William, every single character has a very specific role that they’re playing, and they’re all so special, so there is something for everyone in this show. You’ve got your puns, your physical comedy and your childish jokes, but there are also serious moments in the show and conflicts and relationships between different characters.

Chana Weiss ’21S (SCDS Board Member, William Gillette): Even the straight characters (the ordinary vanilla characters, in theater-speak) are not. On paper, William Gillette is just this actor who is confident, but really he treats life as a game and everything is fun. Throughout the rehearsal process, Prof. Russell’s mantra has been “faster funnier louder,” so we’re trying to embody that in the show.

YU News: Tell me about the roles you play.

Tamar Guterson ’21S (Daria Chase): Daria chase is… well, it’s honestly hard to say. She is condescending, glamorous, likes to have everyone under her spell, she’s big and over the top but also very serious, and when she comes into the room, everything is about her. From the moment she enters through the end of the show she just makes things happen the way she wants them to. It is really fun but also uncomfortable for me because I have never played a character like this in my life.

CW: I play William Gillette who is actually a real person. He wrote the first staged play of Sherlock Holmes and starred in it as Sherlock Holmes. So in our play, it’s about William and his fellow actor friends, but then all of a sudden he has to solve a real-life mystery as opposed to just personifying Sherlock Holmes.

In terms of my role on the board, we all bring something different, and we couldn’t do it without each person because everyone has things that they’re particularly good at and is always stepping up. We do everything from advertising to concessions to programs to ticketing to making the set and beyond. We just live and breathe theater.

The character I play is Inspector Harriett Goring, who is described as “a British woman in her 40s who somehow is in Connecticut solving a crime.” She ends up getting involved in the craziness, and it’s funny because she’s missing all the clues but at the same time extremely perceptive about certain things, so there is this dichotomy that she walks the line between. In the end, you find out a lot about her.

YU News: How has the rehearsal process been?

TG: We all came into this show saying “this is going to be our life for the next few months,” and we threw ourselves in blind. It’s amazing and challenging. When we’re on stage, it feels like a family because we are all leaning on each other and holding it together.

SC: The second you get in, it is just non-stop craziness, laughter and insanity—and that describes both the show and SCDS. It’s like we’re raising a barn. We have all the people on every side of the structure ready to raise it, and we all have to do it together or it doesn’t work.

YU News: How have things changed for SCDS in the past few years?

SC: Everything changed last year when we finally got a theater space we could feel comfortable in (which we didn’t have before). We worked hard on marketing after that and ended up having articles in The Jewish Press and The Jewish Week as well as mainstream publications like Broadway World, so I think people noticed us last year and that contributed to the high audition turnout for The Game’s Afoot. But because of that, we knew going in that a lot of people were going to get cut, which is a really hard thing because at the end of the day we’re an educational club and we want as many people to get involved as possible. We are not in the business of turning people away, so we knew going in that we wanted to offer different programs for people to get involved, whether it was backstage at the play or this new thing we did that was the 24-hour show, which no one was turned away from and everyone involved had a blast.

We also started getting academic credit this year, which is important because it’s an affirmation that what we’re doing is valued by the University. For us, it wasn’t about having more credits on our transcript or an A; it was about being recognized as doing something important. To that end, we haven’t been promoting opportunities for involvement in the show in a way that relates to credit. We want you to love it, and we want you to do it, and you deserve credit for that, but we’re not interested in attracting more people with the credit or adding another cool out-of-the-box class to your transcript: it’s really about having validation.

YU News: What is your favorite part about being in SCDS?

TG: The people and the passion. My mom was the first theater major at Stern, and she was also the president of SCDS, so right when I got to Stern, I knew I wanted to audition. I was so excited! Since the rehearsal process has begun, it has been amazing and non-stop. I feel so lucky to be able to be part of something with other students that are just as passionate about theater as I am. All of us in the cast just feel really grateful to have been given the opportunity that we were given.

SC: Tamar came into the club fair, and she came up to our table and said very sweetly, “Hi, I’m Tamar. How do I get to the other side of this table?” We laughed, and internally I was like, “Yes!” because as a president, it is so exciting to see someone who is ready to get involved because continuity is key. I told her, “You just have to love it, and you just have to do it.”

Tamar’s situation is something that is characteristic of SCDS through the years. SCDS is a family, and no matter when you came here—in the ’80s or last year—you can come back today, and you’re a part of the unspeakable bond between people who have been involved in the SCDS. It’s like, I get you, you’re family, our hearts are connected in some eternal way that is just completely indescribable yet so real. We decided since we’re so appreciative of this bond and every woman who has come before us in SCDS, we’re doing an alumnae night on Wednesday, Dec. 19, and we’re inviting all the alumnae to come at a discounted price. We want to show our appreciation for everything they’ve done because it has been a really hard road, and a lot of people haven’t gotten to see the fruits of their labor in terms of getting the theater and getting credit, so we just wanted to bring everyone together for a picture and a night of fun and a reception afterward—it will just be a nice mingling of SCDS past and present.

CW: I’m from Denver, and my mom and I create all the theater opportunities there. My high school was too small to have choirs or dramatic societies, so I didn’t have anything like that in my school. I was very excited to come to Stern to an already existing thing, and then when I got here, I was so thrilled because I knew I found my people. There is just a bond between theater people, and I have never been able to have theater friends before, and it’s really special.

YU News: What do you feel being involved in the arts has given you?

TG: Any opportunity to get more involved in the arts, and I was always been there because the arts is where I feel most at home. I feel the most myself when I’m on the stage.

CW: Gaining confidence is an important side effect of the arts. I run a musical theater camp over the summer for elementary school and middle school girls, and I just see them grow and blossom, and it is so necessary for them. In terms of the skills it teaches, having to balance this with college and studying and then working with people and being open to different ideas teaches us a lot, plus there is a lot of communication that has to go into it and a lot of technical planning and even just finding your own potential whether that’s acting or planning or building set—it allows you to discover so many things that you didn’t know existed about yourself.

SC: You gain an understanding of how to create something from the grassroots stage and see it through to the end of the finished product. We’re in college, and college is all about finding yourself and discovering who you are, and there is no better place to do that than in the arts and in theater. You’re discovering something about yourself that you didn’t know existed and discovering things about other people as well. We all have a lot of pride in what we do. This experience is amazing, and I would never trade it.

Tickets can be purchased at https://scds.ticketleap.com/the-game/