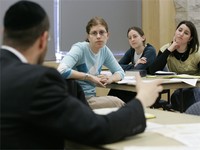 Jul 12, 2006 — Instead of doing the things many college students do during the summer –– working, shopping, or enjoying the outdoors –– several young women spent their June afternoon in the Levy Lobby at Stern College for Women, discussing Massekhet Brakhot.

The women –– both Stern alumnae and current students –– were part of the voluntary, all-day June Learning Program the school’s Jewish Studies program holds every summer.

The program takes advantage of the chavruta (partner) style of learning with a partner. While many women learn with a chavruta independently during the year, they are not always able to devote so much class time to exploring texts related to one topic.

“This program affords us the extra time to devote to such in-depth learning,” explained 2006 Stern graduate Chani Etengoff, who was participating in the program in the afternoons. “Here we have more time to build the logic on our own.”

This summer’s program dealt with topics in Massekhet Brakhot, a section of the Gemara. Rabbi Aaron Cohen, an instructor at Stern’s Rebecca Ivry Department of Jewish Studies, taught in the mornings, beginning the day with a traditional shiur (class) and following with two hours of chavruta learning based on that lesson. In the afternoons the women learned with their partners for two hours, and took a class with Rabbi David Pahmer, also an instructor in the Rebecca Ivry Department of Jewish Studies.

“This gives the students an exciting opportunity,” stressed Rabbi Pahmer, adding that the program was created five years ago based on students’ requests. “This is not for credit, just for knowledge. The students are here purely of their own volition.”

Ms. Etengoff took Rabbi Pahmer’s class during the school year and wanted to continue learning with him. She is also going to be a madricha (counselor) at a midrasha (women’s learning institute) in Israel and wanted to have time to explore texts on her own.

Stern College junior Jaimie Fogel participated in the program during the time between when school ended and her responsibilities as a counselor for Sulam began. She plans to take the advanced Gemara class at Stern in the fall and wanted to strengthen her textual skills over the summer.

In both the morning and afternoon sessions, the students were aided by Devora Khayyat, a participant in the Graduate Program in Advanced Talmudic Studies at Stern College (GPATS). Ms. Khayyat was hired by the program to help learners with less background and reinforce some of the more difficult concepts. While the participants in the program were in the advanced track in Stern’s Jewish Studies program, the program is open to college-age women from any university and any learning background.

“There are no grades or tests, but the students are learning the text directly, so they do need a certain background,” Rabbi Pahmer explained. But he added that he would like to see the program grow and attract a diverse group of students.

“I am pleased that each summer, students who have the initiative can have the opportunity to seek high level learning here at Stern College,” said Dr. Ephraim Kanarfogel, chairman of the Rebecca Ivry Department of Jewish Studies and director of the Graduate Program in Advanced Talmudic Studies at Stern College.

“I enjoyed the program,” said 2006 Stern graduate Sarah Weinerman, who will be teaching biology in the fall at Ma’ayanot Yeshiva High School for Girls in Teaneck. “Chavruta learning is quite challenging. You get to talk concepts over with others as they are introduced, and you have the teacher right there and you can speak with him afterwards to get more clarity.”