On Monday, May 6, 2019, more than 350 students and supporters of the Zahava and Moshael Straus Center for Torah and Western Thought gathered at Congregation Shearith Israel on the Upper West Side of Manhattan to explore the life and legacy of one of the titanic figures who defended liberal democracy from the spread of fascism, Winston Churchill.

The program was the latest installment of the Straus Center’s “Great Conversations” series in which the Center’s director, Rabbi Dr. Meir Soloveichik, engages authors and scholars in discussions about the ideas and values of their work and their broad relevance to modern Jewish life.

Andrew Roberts joined Rabbi Dr. Meir Soloveichik for an hour-long interview about Churchill, Walking with Destiny, his biography of what many historians consider the greatest statesman of the 20th century.

Their talk touched upon a host of topics from the author’s decision to pen a Churchill biography—to date more than a 1,000 have been published—to the late prime minister’s views on religion, his American heritage, nationalism and Zionism.

In his opening remarks, Dr. Soloveichik quoted a passage from Roberts’ biography in which a 16-year-old Churchill confided to a friend that he envisioned a distant future in which he would save England from a tremendous invasion. “If most teenagers were to speak with such conviction, we would diagnose them as clinical megalomaniacs. Or fantasists. The only difference is that with Churchill his predictions actually came true,” noted Rabbi Soloveichik. “So what does that say about his character, personality and role of destiny in his life?”

“It is absolutely essential to understanding Churchill that he had this driving personal sense of destiny,” noted Roberts “and it never ended, even in the great reversals of fortune he experienced. Ultimately, he believed that one day he would save England.  It was a destiny that he had consciously spent a lifetime shaping. Churchill learned from his mistakes and put those lessons to use during civilization’s ‘most testing hour.’” 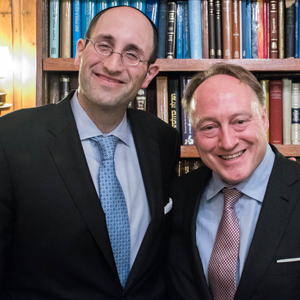 When asked why he decided to write a biography on Churchill, Roberts noted a “cornucopia of new sources” that had been made available in recent years. These include King George VI’s diary records of his weekly audiences with Churchill during the World War II, verbatim reports of the War Cabinet meetings over which Churchill presided and 41 sets of papers added to the Churchill Archives in Cambridge, all of which have never been used by a historian before and which shed new light on Churchill’s thinking during the war years.

“What all these sources show us,” said Roberts “is a man of passion, a romantic figure driven to achieve greatness by his love of the British empire and his deep sense of history.”

On May 22, The Straus Center for Torah and Western Thought, the International Center for Law and Religion Studies of BYU, and the J. Reuben Clark Law Society will co-present “The Media and Religion: Trends and Challenges.” www.religiousfreedomconf.org