“It is so critical to show appreciation, to recognize and thank those who help us on our journeys,” said President Joel in his opening remarks. “At this wonderful event, we all have a chance to show our appreciation in the best way we can—through the accomplishments of our students.” The president announced that 107 students received Wilf Scholarships during the 2014-15 academic year.

“YU is a very important institution for young people around the world, as it’s a place where they can strengthen their Judaism with a solid education as a strong foundation,” said Zygi Wilf. “My family and I have been attending this luncheon for 20-some years now, and we love seeing the students and hearing of their accomplishments, plans for the future, and above all, their dedication to Judaism. YU is about helping Judaism not just survive, but thrive, and my family is proud to help support that.”

Zygi’s father, Joseph Wilf, is a Holocaust survivor, as was Zygi’s uncle, Harry Wilf, of blessed memory. Both Joseph and Harry felt a special mandate once they arrived in America to help Judaism thrive. They became one of YU’s “first families” with a major gift to establish a fund for scholarships for future students. Joseph eventually joined the YU Board of Trustees and the Board of Overseers of Sy Syms School of Business and his wife, Suzie, joined the Board of Overseers of Stern College for Women. Both Zygi and Mark are currently members of YU’s Board of Trustees.

The Wilf family has been among the most generous donors to Yeshiva University. In addition to providing scholarship assistance to deserving students who would otherwise be unable to attend the University, the family named the men’s campus in Washington Heights, and created a new cardiovascular research center at YU’s Albert Einstein College of Medicine.

“It was tremendously exciting to see and hear the stories of so many students who had thrived at YU thanks to the generosity of the Wilf Family,” said Seth Moskowitz, vice president for institutional advancement. “It is a testament to the Wilfs that even after more that 2 de 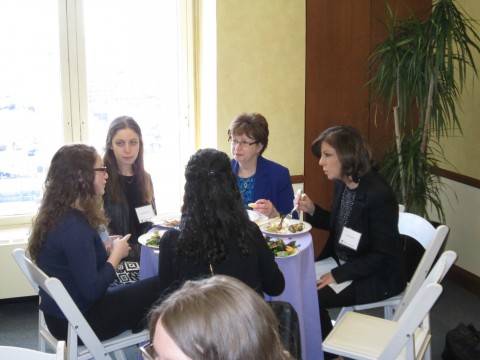 cades of support, 3 generations of the family came up to YU to meet our students. That kind of caring philanthropic support is unique and serves as a model for us all.”

Shalva Ginsparg, a Stern College senior majoring in English literature and Judaic studies, credited the Wilfs with allowing her to focus on getting a wonderful, well-rounded education without stressing over how to afford it. “I’ll be attending Teachers College at Columbia University for my master’s, and I’m perhaps more grateful to the Wilfs now than I was before, as I’m dealing with the finances of graduate school,” she said. “It’s a remarkable thing to be able to have the kind of experience I had at YU without financial burden.”

“I had always dreamed of getting a world-class education in a Jewish environment and it was only because of the Wilf family that I was able to do so,” said Dovi Nadel, a Yeshiva College senior majoring in philosophy and Jewish history. “I am so grateful to the Wilfs for every moment that I’ve spent at YU.” Nadel, who was active in various extracurricular pursuits at Yeshiva, including YU’s National Model United Nations, Student Holocaust Education Movement, and Kol Hamevaser, will pursue ordination from Rabbi Isaac Elchanan Theological Seminary and a master’s from Bernard Revel Graduate School of Jewish Studies next year.

Over the course of the luncheon, students shared their plans for the future—many of them aspiring doctors, computer scientists, rabbis, teachers and lawyers, among other professions. They also discussed a wide range of topics with the Wilf family, including the state of healthcare, the future of Jewish education, and, of course, football; Zygi Wilf is the principal owner of the Minnesota Vikings of the National Football League, and a Vikings flag proudly waves on campus annually in their honor.

Aptly summarizing the event at its conclusion, Mark Wilf spoke to the students and referenced his parents’ original vision to help the Jewish people flourish. “It’s invigorating to see, from speaking with all of you, that the future of the Jewish people is in good hands,” he said. “My family has been coming here for over 20 years and, God willing, we will keep coming back for many years to come.”