YU Students Pitch In with Disaster Relief, This Time Closer to Home 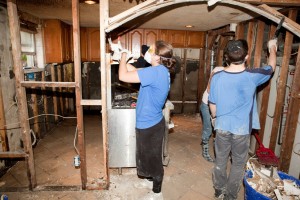 The cleanup effort was coordinated by YU’s Center for the Jewish Future (CJF) in partnership with NECHAMA—a national Jewish voluntary organization that provides cleanup and recovery assistance to homes and communities affected by natural disasters—and sent more than 25 students to  help.

“We’ll go to any place where we can provide help,” said Gene Borochoff, one of the founding members and vice president of NECHAMA. “The people in so many of the communities we work with have never had contact with a Jew before and so we proudly become the face of Judaism.”

With September 11 being designated as a National Day of Service, the CJF decided to dedicate the weekend to reaching out to those in need.

“As soon as we found out that the hurricane was coming to the East Coast, we knew that YU had to get involved,” said Aliza Abrams, assistant director of CJF’s department of service learning and experiential education. “We contacted NECHAMA right away, telling them that we would be here to help out as soon as they arrive.”

On Friday, September 9, volunteers drove to Saddle Brook, NJ to help clean out the basement of a multi-family home which was flooded under five feet of water. The basement was the primary living space for a family who, after the hurricane, were only able to save the clothes on their backs. An elderly Catholic woman living in the flooded property asked the students what day the Jewish High Holidays begin, planning to light a candle in honor of the volunteers. 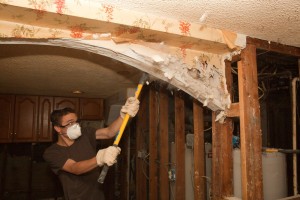 “We don’t need to travel all the way to New Orleans or Birmingham to help out, we have our own backyards to give back to,” said Ayelet Kahane, a recent graduate of Stern College for Women and current CJF presidential fellow. Kahane worked with Abrams to help organize the volunteer mission.

This marks the third time CJF has partnered with NECHAMA to offer disaster relief. The CJF has previously worked with them in New Orleans, LA after Hurricane Katrina and in Birmingham, AL after a tornado in April.

“It’s a good feeling to be able to help people,” said Danny Alweis, a Yeshiva College senior from Binghamton, NY. “It’s important that YU and the religious community at large shows a presence in other types of communities, especially when it’s in our own neighborhoods.”

Daniel Hoeft, operations manager at NECHAMA, said “working with Yeshiva is amazing. Every student that comes out has done nothing but impress us. They understand why it’s important to roll up your sleeves and work—being out on the ground and not just donating money.”

Major thanks for the post.Thanks Again. Much obliged.

I am so grateful for your blog.Much thanks again. Great.

A round of applause for your blog post.Much thanks again. Cool.

Thanks for the blog article. Awesome.

Thanks for sharing, this is a fantastic article.Thanks Again. Really Cool.