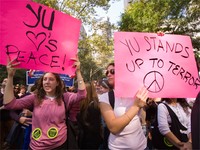 Sep 23, 2008 — Nearly 2,000 Yeshiva University students gathered at Dag Hammarskjold Plaza across from the United Nations on Monday, Sept. 22, to protest Iranian President Mahmoud Ahmadinejad’s visit to New York for the opening of the U.N. General Assembly. The students—who represented Yeshiva College, Stern College for Women, Sy Syms School of Business, and both YU High Schools—made their presence felt among the thousands of demonstrators at the Rally to Stop Iran Now.

“It is empowering to see the huge YU presence amongst the thousands of people at the rally,” said Aliza Wolynetz, a Sy Syms School junior. “Ahmadinejad’s visit can’t go without protest.”

Holding up signs and making their voices heard, YU students protested Iran’s nuclear program, its support for global terrorism, and threats to destroy the U.S. and Israel.

“It’s important for us to be here to show the world that we will not stand for giving Ahmadinejad a platform to speak when he stands for genocide and global terrorism,” said Aaron Kogut, a Yeshiva College senior.

As part of the YU Center for the Jewish Future (CJF) initiative to promote the rally, hundreds of stickers bearing the words “Speak, Stand, Support,” thundersticks and T-shirts were distributed among the crowd.

“This is an opportunity for the students to make their voices heard by the global Jewish community and the world,” said Aliza Berenholz, senior events coordinator of the CJF. “This is exactly our mission: to infuse the student body with a spirit of leadership and sense of klal Yisroel [Jewish unity]. We felt it was imperative for our students to be involved in this important event in a meaningful way.”

Among the demonstrators were many YU alumni, including Adam Braun ’04Y. “YU’s students truly energized the event and it was a real Kiddush Hashem [honor in the name of God],” said Braun, who reminisced about his days as a student. “My time at YU allowed me to reflect upon my Zionist roots and get involved in causes supporting Israel.”