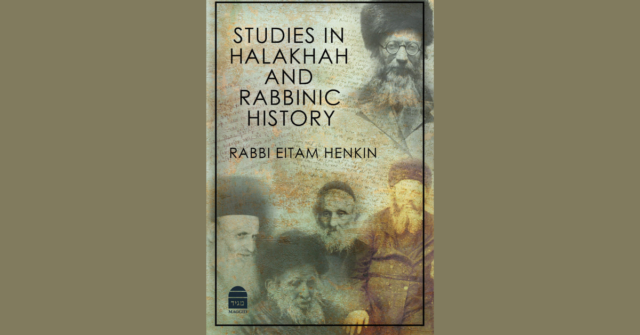 Studies in Halakhah and Rabbinic History collects twenty-four articles, each of them breathtaking in depth and scope, authored by the late Rabbi Eitam Henkin.

Published through the efforts of his family and a dedicated team of translators, the volume includes learned studies in a wide range of fields, including Jewish law, history, Talmudic analysis and contemporary Religious Zionism. One article considers the extent to which one is obligated to soak strawberries in order not to eat any small insects found on them, while another examines instances of historical revisionism among children of Rabbi Abraham Isaac Kook’s dedicated followers.

Many of the chapters draw on Rabbi Henkin’s thorough study of Rabbi Yehiel Mikhel Eptsein’s life and works, such as when he notes that the latter ruled leniently regarding the common custom to bless one’s children Friday night between kiddush and hand-washing, suggesting that this custom might not constitute a hefsek. In another chapter, Henkin delves into the rarely acknowledged fact that Rav Kook’s only semikhah came from Rabbi Epstein. Elsewhere, Henkin notes with irony that a paean to the Russian Tsar, which Epstein included in his Arukh HaShulchan to placate the Imperial Censor, has been reprinted in many subsequent editions of the work by publishers ignorant of its historical and political origins.

A highlight of the book is Henkin’s investigation into the “Bruriah episode,” the tragic tale of a Talmudic figure’s seduction and subsequent suicide that, while preserved in Rashi’s commentary, is not found in the Talmud itself. The author concludes that the story is “apocryphal, of dubious provenance… inserted into Rashi’s commentary by a scribe mistakenly copying the words of a student.”

Henkin’s aforementioned review of how the offspring of Rav Kook’s students hid their fathers’ affinity for his teachings in subsequent years is another particularly fascinating investigation. In one example, a biography was published in Bnei Brak of a student who became a major Haredi scholar who had learned in Merkaz HaRav and studied closely under Rav Kook but later became a staunch opponent of secular Zionism. In the biography, the scholar’s son “makes no mention of, not even hints at, which yeshiva his father studied in, whom he learned from, which rabbis he was close to, who gave him semikhah, who gave approbations to his books, and whom he valued most over all other rabbis.”

Rabbi Henkin, who with his wife was murdered by terrorists, was already an accomplished scholar by age 31, having authored numerous books and dozens of articles. All those interested in the quality scholarship he produced during his all-too-short life will be richly rewarded by mining his Studies.