On May 31, “June Zman,” a five-week Talmud program, began at Stern College for Women under the auspices of Yeshiva University’s Graduate Program in Advanced Talmud Study (GPATS). June Zman, which runs through June 30, is open to all college-age and post college-age women, is free for Stern College students, and offers the possibility to dorm. Classes meet Monday through Thursday, from 9 a.m to 1 p.m., with each day divided between chavruta (paired) learning and shiur (lecture). Over thirty students—including Stern College students and alumni, non-YU students, and post-high school students who will attend Stern following seminary—are currently registered.

This marks the first time the Israel Henry Beren Campus has hosted a summer learning program for women. Program overseer Nechama Price, director of GPATS, explained that June Zman serves many students who were not able to incorporate Talmud courses into their timetables during the academic year. “We thought it would be a beautiful idea to have someone who teaches at GPATS give Stern College a month of learning, either for college credit or lishma [for its own sake],” said Price, adding that a broader goal of GPATS is to reach out to the greater YU and general community.

“The fact that women at Stern College requested an extra month of Talmud learning, simply for the sake of Torah study, is a celebration of what makes YU unique,” said Rabbi Kenneth Brander, YU vice president for university and community life. “We encouraged their wish and created a June Zman, similar to what the men have on our uptown campus, and are very proud of the women who have decided to immerse themselves in study for an additional five weeks.”

GPATS Instructor Rabbi David Nachbar is serving as June Zman’s instructor, teaching Tractate Berachot. Rabbi Nachbar noted that the text of Berachot, which explores discussion on topics such as biblical and rabbinic prayer structures, standardized and circumstantial prayers, as well as weekday and special occasion prayers, “offers students the opportunity to deepen their understanding and appreciation of one of our primary modes of serving God in its various forms.” He observed that having a relatively large summer cohort “creates a collective learning environment that is infused with great energy and dynamism.”

The program’s learning is designed to take place at an intermediate level, though Nachbar noted that, like most shiurim, the program contains students with a range of skillsets. Price said that the program aims to engage all learners, whether they are beginners developing new skills, or advanced students who haven’t had the opportunity to utilize them for a while.

Program participant Chani Grossman ’18S said that this is her first experience learning Talmud. “I wanted to try it out in a non-pressured environment,” said Grossman, who studies biology and Jewish history. “So far, it’s really good, and I’m learning a lot.”

Biology major Avital Habshush ’17S noted the challenge of devoting serious lengths of time to religious learning during the academic year. “I decided to enroll in this program to keep learning the Torah that I love and keep growing,” Habshush said. “I think it’s wonderful how the university is giving us this opportunity.” 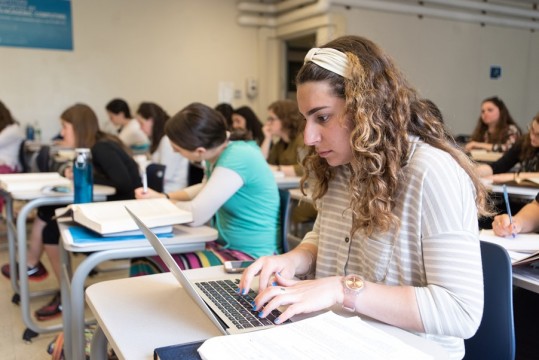 Sharona Kern of Barnard College said she appreciates the chance to experience some of the best that Stern College has to offer. “There is a lack of opportunities for post-college learning when you don’t want to commit to a full year or two, so I was really excited to participate in this program,” she said. “Everyone’s taking the program very seriously, and I don’t take it for granted.”

Rabbi Brander noted that in 1977 Rabbi Joseph B. Soloveitchik gave “one of the most important Talmud lectures of the 20th Century, the first formal lecture on Talmud to women” at Stern College, with the intention that the Talmud would become part of the heritage known as Torat Imecha (the Torah from your mothers). “Yeshiva University, through Stern College and its Graduate Program in Advanced Talmud Studies for women (GPATS), is the largest institution in the Jewish world teaching Torah and Talmud to women,” said Rabbi Brander. “We encourage women to encounter and intellectually engage with the rabbis of the Talmud and the subsequent commentaries.”