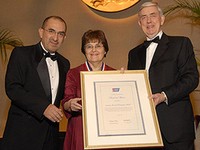 Nov 25, 2008 — The American Cancer Society, the nation’s largest non-governmental funder of cancer research, has given its highest award, the Medal of Honor, to four Americans who have made outstanding contributions to the fight against cancer. Among the honorees is Susan Band Horwitz, Ph.D., distinguished professor and co-chair of the Department of Molecular Pharmacology at Albert Einstein College of Medicine of Yeshiva University, who is recognized for her groundbreaking research on the cancer drug Taxol (paclitaxel), which has been used by more than 1 million patients around the world to treat cancers of the ovary, breast and lung.

Other honorees include Senator Ted Kennedy, scientist Mina J. Bissell, Ph.D., and philanthropist Jon M. Huntsman. The awards were presented during an evening gala at the Waldorf-Astoria in New York City. What follows are excerpts from a conversation with Dr. Horwitz on her major contributions to cancer treatment.

“When I started working with Taxol in the 1970s, there was absolutely no indication that it would be useful in the clinic,” says Dr. Horwitz. “Of course I hoped, but I had no reason to think that it would turn into a drug that would help more than a million cancer patients.”

Bark from the Pacific Yew tree (Taxus brevifolia) was collected in 1962 by two botanists who were hired by the National Cancer Institute (NCI), a branch of the National Institutes of Health, to find natural products that might cure cancer. The isolation of Taxol from the bark by medicinal chemists at Research Triangle Institute was published in 1971.

Research into Taxol languished for years. The Yew tree was relatively rare and produced little of the compound. What’s more, isolating and extracting Taxol from the tree’’s bark was difficult. It wasn’’t until the mid-1970s that NCI researchers confirmed that Taxol had anti-tumor properties, but they couldn’’t figure out how it affected cells.

For that, they turned to Dr. Horwitz, a promising young researcher at Einstein who was known for her studies of naturally occurring small molecules and their use in cancer treatment.

Within months of receiving samples of the compound in 1976, Dr. Horwitz and her colleagues discovered Taxol’s mechanism of action. Some anti-cancer drugs kill cancer cells by wrecking the proteins needed to make microtubules, filament-like structures that play a crucial role in cell division.

But as Dr. Horwitz found, Taxol works in a completely different manner. Instead, the molecule sends cells into overdrive, churning out extra microtubules that clog up the cells’ innards. Taxol freezes the microtubules into bundles, preventing them from disassembling. As a result, cancer cells have no way to divide, and they soon collapse and die.

It was a stunning discovery, setting the stage for a whole new class of cancer chemotherapeutic drugs.

But first, Taxol had to be brought from the bench to the bedside, which was no easy task. Early clinical tests showed the drug to be quite toxic, delaying human trials for years. But Dr. Horwitz was undeterred. “We felt that this was a special drug, because it had a unique structure and mechanism of action,” she says.
Researchers at Einstein and other institutions eventually figured out how to transform the compound into a formulation that was safe for human use.

Finally, in 1992, 16 years after Dr. Horwitz first began studying the compound, the FDA approved Taxol for the treatment of ovarian cancer. Later, it was approved for use against advanced breast cancer and small-cell lung cancer. To date, Taxol is the best-selling cancer drug ever manufactured.

“I am very honored to receive this award from the American Cancer Society,” says Dr. Horwitz. “It is so important to realize that basic scientists can make significant contributions to clinical care.”

“I feel strongly that this is not my personal award,” she adds. “It is for my entire laboratory—for all the students, fellows, visiting scientists, and collaborators that have worked with me all these years.”

The story of Taxol is not over. Some tumors are resistant to chemotherapy, while others develop resistance over time, and Taxol is no exception. Dr. Horwitz is now working to pinpoint the molecular mechanisms that underlie Taxol resistance, in the hope of providing another powerful target for combating cancer.

She is also developing combination therapies, in which Taxol is given along with other chemotherapy drugs. The idea is to attack cancer cells from multiple angles, hampering their ability to develop resistance.

In addition, Dr. Horwitz is studying the molecular biology of microtubules for clues related to Taxol resistance. More specifically, she is examining whether the presence of different forms of tubulin (a building block of microtubules) might explain why some cancer cells are more responsive to Taxol than others.

One offshoot of this work may be the development of biomarkers that can be used to predict which patients will respond well to Taxol. “Taxol has side effects, and we don’t want to give the drug to people who are not going to get any benefit,” she explains.

Today, Dr. Horwitz is more optimistic than ever about curing cancer. “We’ve learned a tremendous amount in the 35 years since I got my first research grant, which was from the American Cancer Society,” she says. “I believe that with enough financial support, and with the brightest and the best young people going into cancer research, we should be able to overcome this disease.”

Hello Web Admin, I noticed that your On-Page SEO is is missing a few factors, for one you do not use all three H tags in your post, also I notice that you are not using bold or italics properly in your SEO optimization. On-Page SEO means more now than ever since the new Google update: Panda. No longer are backlinks and simply pinging or sending out a RSS feed the key to getting Google PageRank or Alexa Rankings, You now NEED On-Page SEO. So what is good On-Page SEO?First your keyword must appear in the title.Then it must appear in the URL.You have to optimize your keyword and make sure that it has a nice keyword density of 3-5% in your article with relevant LSI (Latent Semantic Indexing). Then you should spread all H1,H2,H3 tags in your article.Your Keyword should appear in your first paragraph and in the last sentence of the page. You should have relevant usage of Bold and italics of your keyword.There should be one internal link to a page on your blog and you should have one image with an alt tag that has your keyword….wait there’s even more Now what if i told you there was a simple WordPress plugin that does all the On-Page SEO, and automatically for you? That’s right AUTOMATICALLY, just watch this 4minute video for more information at. Seo Plugin