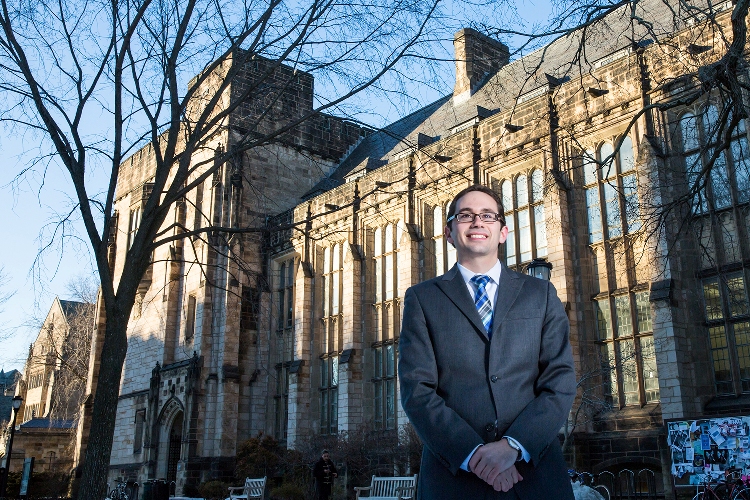 “Compassion” and “trust” were the two words that led Rabbi Noah Cheses to a career in the rabbinate. As a curious high school junior in Newton, MA, he’d approached local congregation leader Rabbi Benjamin Samuels ’94YC, ’94BR, ’96R, about his calling. “He told me that becoming a great pulpit rabbi requires opening your heart, sharing your mind and forming relationships of trust with your congregants,” said Cheses.

It was a deeply intriguing message, and Cheses took it to heart. After graduating from the Jay and Jeanie Schottenstein Honors Program at Yeshiva College, he decided to enroll in the semikha program at the Rabbi Isaac Elchanan Theological Seminary. Simultaneously, he pursued a master’s degree in Jewish philosophy at YU’s Bernard Revel School of Jewish Studies. He also studied in YU’s Caroline and Joseph S. Gruss Institute in Israel for two years while completing coursework for his master’s degree in Family Counseling and Therapy at the Family Institute in Jerusalem.

“It was a tremendous privilege and pleasure to learn in the YU Beit Midrash with [Rabbi Henoch and Sarah D. Berman Chair in Talmud] Rav Aharon Lichtenstein, as well as tasting Torat eretz yisrael [the Torah of Israel] with [Benjamin and Charlotte Gottesfeld Chair in Talmud] Rabbi Dovid Miller and [Ruth Buchbinder Mitzner Chair in Talmud and Jewish Law] Rabbi Asaf Bednarsh, who provided me with a derech halimud [methodology of learning Torah] and a derech hachayim—a method of living in the world guided by our sacred mesorah,” said Cheses, whose outstanding scholarship won him numerous accolades: at YU, he was appointed a Schottenstein Scholar in Jewish Studies, Dr. Noman Lamm Fellow in Jewish Thought, and a Wexner Graduate Fellow.

“During my time in New York, I maintained regular learning check-ins and chevrutot with [YU Senior Vice President] Rabbi Josh Joseph, [University Professor of Jewish History and Jewish Thought] Rabbi Dr. Jacob J. Schacter and Rabbi Ari Rockoff, associate dean of institutional advancement for YU’s Azrieli Graduate School of Jewish Education and Administration and Revel. These individuals guided me to bring my passions and talents into alignment and to leverage that source of creativity to serve the Jewish people.”

For Cheses, that meant bringing his unique blend of intellectual study and spiritual warmth to Yale University as a Seif Jewish Learning Initiative on Campus Torah Educator, a program run through the Orthodox Union. Together with his wife Sarah, a graduate of the S. Daniel Abraham Honors Program at Stern College for Women, Cheses provides Yale students with opportunities for religious study on a group and individual basis and a welcoming home-away-from-home in which to observe Shabbat and other holidays. While pursuing a master’s degree in religious studies at Yale’s Divinity School, he also serves as the director of religious life at Yale’s Tikvah Summer Institute and the associate rabbi at the university’s Joseph Slifka Center for Jewish Life.

“My education at RIETS has equipped me with many of the tools I use daily in my work on a college campus,” said Cheses. “From the pastoral psychology classes with Gwendolyn and Joseph Straus Chair in Jewish Education Dr. David Pelcovitz to the Practical Halakha Course with Rosh Yeshiva Rabbi Ezra Schwartz, I often find myself looking back at my notes to remind myself of the knowledge and wisdom that was availed to me. I also consult almost weekly with one of the RIETS Roshei Yeshiva to talk through a halakhic inquiry.”

Long term, Cheses is looking forward to building an inclusive community of his own in a pulpit role that will “serve as a source of robust meaning and purpose for all its participants.” “Rabbi J.J. Schacter, who has served as a guiding force in my life for over a decade, has shown me the power of community through his actions and words,” Cheses said. “His unique blend of passion and compassion, of intellect and emotion, is contagious—it stimulated my soul to take responsibility for my own life and for the future of the Jewish people.”