On Monday, Jews across the world will commemorate and mourn the tragic and unspeakable events of the Holocaust as they mark the 60th Yom HaShoah, or Holocaust Remembrance Day. Many will gather to pray, share stories and hear the testimony of survivors, including students at Yeshiva University. But as time passes and fewer survivors remain to bear witness, how can we as a community ensure that the lessons of the Holocaust are never forgotten?

PRISM: An Interdisciplinary Journal for Holocaust Educators, published by YU’s Azrieli Graduate School of Jewish Education and Administration, seeks to keep the memories and conversations of the Holocaust alive by examining specific issues through multidimensional lenses of history, poetry, psychology, education and art, among others. YU News sat down with editors Dr. Karen Shawn, visiting associate professor of Jewish education at Azrieli, and Dr. Jeffrey Glanz, Raine and Stanley Silverstein Chair in Professional Ethics and Values at Azrieli, to discuss the changing face of Holocaust education in the 21st century.

PRISM incorporates art, poetry and narrative into the experience of Holocaust education. What are the advantages of this approach versus a traditional textbook? 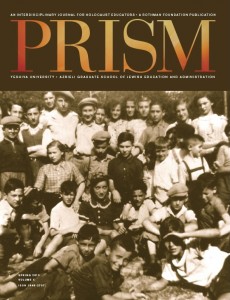 Glanz: It’s multisensory learning. Children sometimes can’t express themselves in verbal forms but they can draw a picture or sing a song. This journal focuses on art, photography and poetry as a way of touching the emotions, along with the cognitive, historical aspects of the Holocaust.

Shawn: So many survivors themselves are also involved in the arts. It’s really important for people to understand that there are lots of ways to tell the story. For example, our most recent issue features a play about the Kindertransport taken from testimonies of survivors. The parts are small, so it’s classroom-friendly and appropriate for all levels of readers. You can have your students do a dramatic reading or a performance and it will stay with them forever, because once you become an Edith who was on the Kindertransport, you’ll never forget her story. That kind of involvement is crucial to continuing the memory and the knowledge.

I think PRISM also helps readers understand that when they experience a trauma, they can draw on their own resilience and express themselves in ways that help them make meaning from it, like these survivors did.

This is our fifth issue and the response from teachers has been phenomenal. It’s been requested in 35 countries and 50 states, from educators, Holocaust museums and resource centers across the world. They’ve used every component of it. Some even teach PRISM as a self-contained unit of study.

What are the biggest misconceptions about Holocaust education?

Glanz: Unfortunately, one of the things I see in the field all the time is fourth graders—and even kindergarteners—learning about the Holocaust as a cataclysmic historical event in Jewish history, which is totally pedagogically and developmentally inappropriate. You can talk about the importance of community and friendship at that age, but the Holocaust in all its brutality should not be taught before middle school.

Shawn: The other misconception is that students respond only to the most graphic images of horror. Teachers think because the world is such a horrible place and TV and Internet are so violent, they have to rival that imagery to reach students. But as you learn in the classroom, when everyone else is shouting, the trick is to lower your voice. Horror doesn’t teach—it suffocates. Instead, we want to ask the essential questions that tell the Jewish story.

What’s the best way to teach the Holocaust to younger students?

Shawn: Start at the beginning and approach it chronologically because it was a successively terrible thing. If you begin teaching the Holocaust in the way it actually happened, slowly and mildly, you can lay a foundation without smashing all the atrocities that occurred into the head of a sixth grader. Give yourself permission to understand that it’s not your task to finish the job. Preferably, collaborate with all the teachers in your school to create a sequential Holocaust curriculum so you can teach it little by little as students grow up.

Glanz: We would encourage teachers to be most focused on following the life of one person or family as they traversed the Holocaust experience. People were not just victims. There was a rich cultural history before the Holocaust. What was that history about? What was their family life like? What foods did they eat? What games did they play? How did they experience school and community? Then talk about what happened historically. Follow that person through to the ghettos or transport to the camps. And then, after the Holocaust—what happened? The world didn’t end there. There was a rich robust Jewish life beyond the Holocaust.

What is the best way to make Yom HaShoah a meaningful experience?

Shawn: The standard is to hear a survivor’s testimony. But it’s a desperate time because so many survivors are dying and so few are available to speak. It’s important that everyone now hear as many survivors as they can because we are the last generation—the witnesses to the witnesses. Without them, it will be very different. But it’s also important to have an educational component after that evocative component. Consider what you heard; promote round-table discussions. Survivors don’t consider themselves heroes; do we? Are these people heroes or victims? Historians use the words perpetrators, bystanders and victims. Is that how we see ourselves? How did some Jews turn that victimization into something else? How did it affect their religious observance? How did they pray?

Glanz: The question you want to ask yourself after attending a Yom HaShoah event or hearing a survivor speak is, how can I be a better person after learning this? Learn more about the Holocaust online or read a biography. Do chessed. Do something. If you learn about a cataclysmic event like the Holocaust and you’re not changed by it or more sensitive to the sufferings of others, whether they are Jewish or not, it’s no different than learning about the American Revolution or any other impersonal historical event.

Why is Holocaust education so vital?

Shawn: The Holocaust contains the seeds of every important conversation that all human beings have to have if they believe it’s important to live an examined life. You can talk about the idea of resilience, heroism, antisemitism, hatred. What does it mean to pray in the midst of despair? Where was G-d? How do we understand the dilemmas we all face today and how do they differ from the choiceless choices of the Holocaust?

Otto Frank had to make one of those choices: he could keep his family together in hiding or separate them and send them out into different hiding places. He knew either decision would probably result in death. That’s what Jews faced. What can we learn from the ways Jews responded when confronted with those dilemmas?

There are survivors who say, “I wouldn’t be here if it wasn’t for the Christians who rescued me.” And there are other survivors who say, “Rescue is a footnote to the Holocaust. Nobody did anything for us. We were abandoned by the world.” Those two views are diametrically opposed. What view do you hold of the world? Do you see yourself as part of a larger world community to which it’s important to assimilate? Or do you think, “We have only ourselves to depend on and we have to circle the wagons and make sure our number one goal is to strengthen the Jewish community?”

You have to make a decision as a Jew about what you think about these things.

The Spring 2013 issue of PRISM can be viewed online here. To contact Shawn or Glanz or to request a free hard copy, email prism@yu.edu.