Hundreds of staunch supporters of Yeshiva University streamed into the Grand Ballroom of the New York Hilton Midtown on Sunday, Dec. 8, 2019,  to celebrate the 95th Annual Hanukkah Dinner and Convocation, a yearly commemoration of the values, mission and achievements of the oldest and most comprehensive educational institution under Jewish auspices.

As Dr. Ari Berman, President of Yeshiva University, described it in his remarks, the purpose of this event and events like it is to reaffirm YU’s mission of infusing its students with the important Jewish values so that they can become successful role models and leaders “in an ever-evolving world by being deeply rooted and forward-focused.” At Yeshiva University, he continued, “we are educating our next generation to enlighten rather than inflame, inspire rather than incite, who see their mission to share their values with love to others. In this world, which can often feel like a winter’s night, the world of tomorrow needs their light for warmth and illumination. These are our students, and this is Yeshiva University.”

This night revealed two stellar accomplishments to the assembled audience. Dr. Ari Berman, President of Yeshiva University, and the YU Board of Trustees (Moshael J. Straus, chair) conferred an honorary degree upon Howard Jonas, the much-celebrated businessman and philanthropist. Jonas was not only the originator of several notable companies, such as IDT Corporation, Genie Energy and IDW Media, he and his wife, Debbie, support a host of causes beneficial to the Jewish community, such as health and hospitals, education, poverty relief, addiction treatment, religious outreach and the disabled, primarily in Israel and the United States.

In conferring the degree upon Jonas, Dr. Berman praised him for how his faith has established the bedrock of the enterprises he has founded so that they “do well and do good at the same time.” He also extolled Jonas’ kind heart and sense of justice, which shone forth upon the world as a “beacon.”

The second major revelation was the announcement by Dr. Naomi Azrieli, Chairman and CEO of the Azrieli Foundation, of an $18 million donation to the University. This is one of the largest gifts focused on Jewish education that Yeshiva University has received and will provide continued support of the Azrieli Graduate School of Jewish Education and Administration as well as strengthen undergraduate scholarships. The announcement was greeted by a wave of enthusiastic applause and a standing ovation.

For their generosity and steadfast loyalty to the University, the Azrieli family were presented with the University’s Legacy Award in honor of 36 years of transformative partnership with Yeshiva University and honoring the Azrieli Foundation’s three decades of impact philanthropy.

In accepting the award, Dr. Azrieli painted for those assembled a warm and loving portrait of her father, David, the man who founded the relationship with the University and who through a life of travails still managed to have a cheerful resilience and a thirst for education. “We are honored to receive this recognition, which would have meant so much to my father,” said Dr. Azrieli. “He held a deep belief, which we share, in the redemptive power of education. He also felt that his support of education wasn’t charity, as it was giving back what education had given to him.” She added that Yeshiva University was uniquely positioned to lead at this critical moment in the history of the Jewish community “by renewing its commitment to be forward-thinking and deeply rooted in Jewish values, embracing and preparing for the changed and changing world we’re in while bringing to bear the brilliance and wisdom of our tradition.”

The evening also showcased the Yeshiva University Women’s Organization (YUWO). Marjorie Diener Blenden, a member of the YU Board of Trustees, gave a funny and heartfelt introduction to the YUWO “wonder women,” as she called them, who for 95 years, since 1924, have been raising funds for scholarships and stipends to help students financially make it through YU. She also asked two YUWO beneficiaries, Rabbi Ephraim Ilyaguev ’08SB, ’13R, ’15BR and Bina Hanfling ’09S, to share their stories. They spoke with great thankfulness and pride about how YUWO’s contributions were, in Hanfling’s words, a “blessing” that made their present lives and successes possible.

Rounding out the festivities were testimonials by five YU students. Introduced by Shira Yoshor, a member of the YU Board of Trustees, Jake Benyowitz, Bella Adler, Ben Atwood, Bailey Frohlich and Daniel Gottesman gave voice to the many blessings the University has afforded them and how each in his or her own way will carry forward the mission of the University into their personal and professional lives. 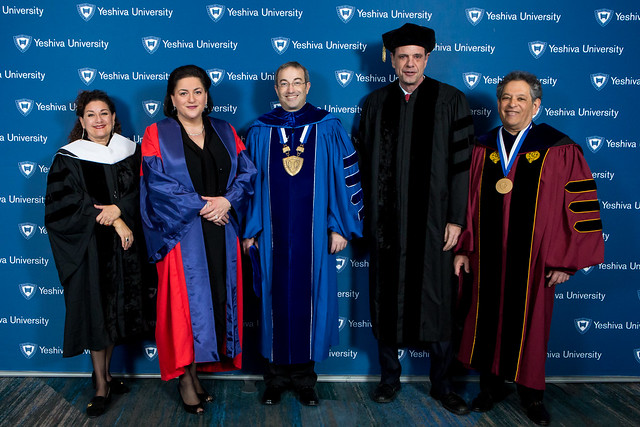