We’re living in historic times in the wake of the Abraham Accords, with extremely positive developments dramatically changing the Middle East.

That’s the message Shaikh Abdulla Bin Rashid Al Khalifa, Ambassador of the Kingdom of Bahrain to the United States, shared with a group of 100 Yeshiva University students in a groundbreaking dialogue held on Monday, Nov. 22, 2021, on the Wilf campus, which was broadcast live to more than 2,000 listeners.

Presented by the Political Science Department and the Rabbi Arthur Schneier Program for International Affairs, in partnership with the Yeshiva University Political Action Club (YUPAC), the event was a live taping of Jason Greenblatt’s “The Diplomat,” a podcast sponsored by Newsweek. Greenblatt is a graduate of the Marsha Stern Talmudical Academy/Yeshiva High School for Boys (1985) and Yeshiva College (1989) and former White House Middle East Envoy.

“This event is just another example of how Yeshiva University has embraced the Abraham Accords, a historic agreement that paves the way for a brighter future in the Middle East and beyond,” said Alex Friedman, co-president of YUPAC and the event’s main student organizer.

“It gives me special pride that it was students who proposed this event and played a major role in its planning, showing that students at YU can be at the forefront of change in the world,” added Friedman, thanking Jon Greenfield, director of government relations, and Herschel Hartz, assistant director of the Office of Student Life, for helping to organize the live podcast. “YU has played a special role in building bridges between different religions and communities, and these accords provide us, the current students of Yeshiva University, the chance to continue that legacy in order to create a better tomorrow.”

Extending gratitude to Shaikh Abdulla for joining him at his alma mater, Greenblatt moderated the Q&A session, probing the Shaikh’s thoughts on topics such as the impact of the Abraham Accords on the global Jewish community, Jewish life in Bahrain and opportunities for U.S. college students in the region.

Shaikh Abdulla shared that Bahrain is a small, open-minded country of 1.5 million people which embraces diversity and has a genuine thirst for peace. Regardless of a country’s size, he said it’s important to work on commonalities, build relationships and keep communication channels open – an approach that has helped shape Bahrain’s domestic and foreign policies.

“There’s a lot of positive news coming out of the region… and students can do much more than other entities, including governments, in spreading the word and making sure that people really recognize what’s happening in the Middle East,” Shaikh Abdulla said, explaining that it’s important to follow the developments, gain insights and get the word out to ensure people understand how historic this moment is.

He noted that in the last year alone, Bahrain has made great headway in setting the foundation for an enduring relationship with Israel, including securing more than 31 Memorandums of Understanding (MOUs), establishing an ambassador in Tel Aviv and an Israeli embassy in Bahrain, and running twice-weekly trips to Israel via its national carrier, Gulf Air.

Bahrain itself has a Jewish community that has peacefully coexisted in this Muslim majority country without security concerns, he added. There’s a recently renovated synagogue, a Jewish store, kosher meal offerings in major hotels and a growing selection of kosher foods in supermarkets.

Applauding Shaikh Abdulla for sharing his insight, YU students walked away invigorated by the event.

“This event proves that not only is peace possible between Bahrain and Israel but between Jews and Muslims as well,” said Jonathan Linsider ’23YC. “It’s an incredible step in the right direction for something that many have worked so hard for.”

Jacqueline Englanoff ’24S added that the event was an incredible display of not just coexistence but also partnership. “To have the ambassador of Bahrain at Yeshiva University shows how far we’ve come, and strengthens the prospects of an increasingly peaceful future,” she said.

Listen to the full episode of “The Diplomat” podcast. 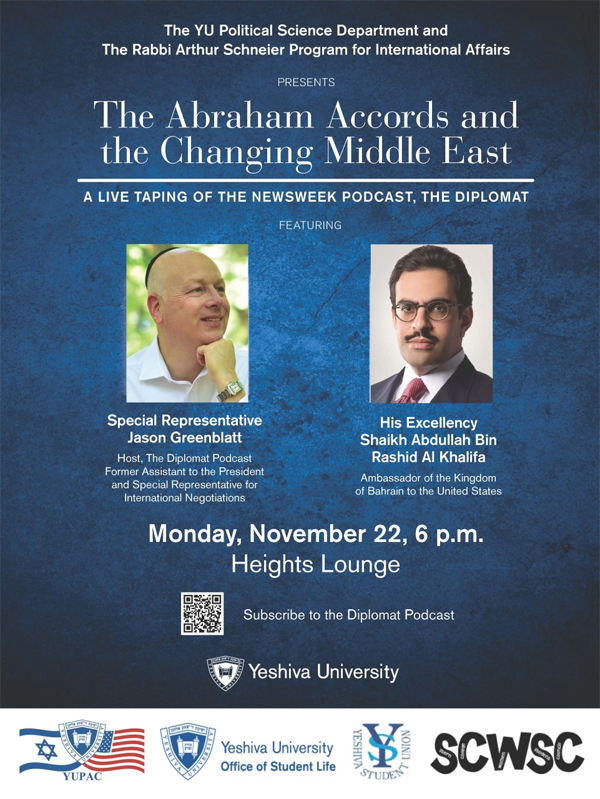