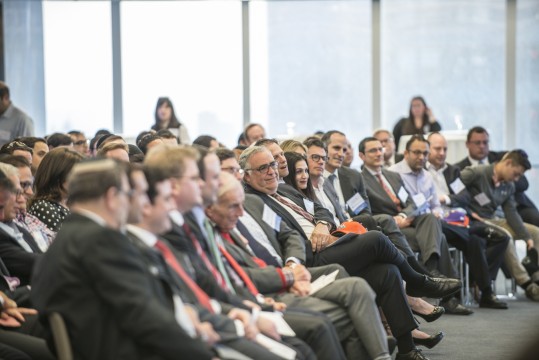 The Yeshiva University Wall Street Group presented a panel discussion on “The Business of Sports” on Monday, May 9, featuring David Samson ’93C, president of the Miami Marlins; Mark Wilf, owner and president of the Minnesota Vikings; and Ahmed Zayat ’83YC, owner of American Pharoah, the first Triple Crown winner since 1978.

The networking event, organized by the Office of Alumni Affairs, was hosted by Proskauer Rose LLP and sponsored by BMO Capital Markets. Approximately 200 alumni and YU staff were in attendance.

All four participants have strong connections to YU. The Wilf family are major supporters of the University: YU’s uptown campus is named for them, and the Wilf scholarship program has been supporting students for 31 years. Samson is a 1993 graduate of Benjamin N. Cardozo School of Law, where he also serves as the chairman of the board of overseers. Ahmed Zayat is a 1983 graduate of Yeshiva College, and Burian graduated from Yeshiva College in 1991.

Burian began by asking the participants to describe current and future challenges in each of their sports. A common challenge was the pressure being placed on their businesses’ revenue models.

Because Wilf and Samson work in a league system, they spoke about making sure that each league member has the resources for talent acquisition so that the sport can remain competitive and entertaining. As Samson said, “When we talk about revenue sharing, we’re trying to level the playing field on talent acquisition. With better revenue sharing, there is better competition, which makes the pie bigger for everybody.” Wilf agreed: “The revenue-sharing model in place in the NFL allows for the growth of the game, so that it can be true that on any given Sunday, anyone can win.”

Zayat pointed out that the economic model for horse racing is completely different: “The purse—what the horse wins—is not where the money is. The money is in the credentials of the horse and the fees charged for breeding services.” He explained that if a horse retires at the age of three and lives until the age of 25, breeding fees can bring in as much as $40 million over the lifetime of the horse.

Another topic concerned the relationship between labor and management. Wilf called it a “constant dance that’s going on all the time aimed at finding a long-term solution where we can all have stability.”  Samson agreed that “labor peace is necessary,” but the high player salaries in baseball present a different problem when it comes to labor issues. “If fans see a fight between what they see as rich and richer people, they won’t get angry – they will get apathetic and disappear,” said Samson. “We need to keep our interests aligned so that pie will grow and the fans will be entertained.”

Zayat noted that jockeys and trainers are free agents, and they get paid percentages of the revenue that come in from races and breeding.

In response to questions about gambling (including the rise of fantasy sports) and advertising (such as plastering logos on uniforms and venues, as in NASCAR or soccer), all three explained they approach these topics with a great deal of caution. As business enterprises, raising revenue is always important (as Samson noted, the length of every team’s product trademark list is “boggling”), but Wilf added that since “in the end, all we have is the integrity of the game,” it is important to keep operations as clean and simple as possible.

Digital technologies have also changed sports. For instance, Wilf described the technological improvements in the new Vikings stadium, including enormous screens, virtual reality exhibitions in their museum, and a Vikings app. But all three agreed that while these technologies can improve fan experience, they cannot replace being at a live event. Zayat described the excitement he felt when American Pharoah won his races: “90,000 voices screamed for five minutes, and that just thrilled me. You can’t have a digital substitute for that.”

The evening ended with a question from the audience about how the panelists’ connection to Yeshiva University affects the way they run their enterprises. Wilf spoke about giving back to the community (community service is required for everyone in the Vikings organization) and the pride he feels in how his family has supported YU’s mission for almost four decades. Samson and Zayat mentioned how the “moral compass” they got from YU inspires and guides them to make a difference in people’s lives through the businesses that they run.

Stay in touch with the Office of Alumni Affairs by visiting www.yualuminate.com and joining their new professional networking service.