The Chinese-Jewish Conversation at Yeshiva University

On Tuesday, February 12, 2019, East and West met at a special event titled “China and Israel: How did ancient states emerge? Archaeological perspectives,” which took place in the David Yagoda Commons on the Israel Henry Beren Campus. Marking a special cooperation among different YU schools, it was cosponsored by the Bernard Revel Graduate School of Jewish Studies, the Colloquium Initiative of the Office of the Provost, and the Katz School of Science and Health, which has recruited many Chinese students for its master’s programs.

This event marked the inauguration of the “Chinese-Jewish Conversation at Yeshiva University,” a new initiative spearheaded by Dr. Mordechai Cohen, professor of Bible, associate dean of Revel and chairman of the academic Jewish studies division. Dr. Cohen opened the event by describing this YU initiative, after which he introduced the two main speakers: Dr. Jill Katz, clinical assistant professor of archaeology, and Debby Li, a senior at New York University majoring in anthropology and art.

In his remarks, Dr. Cohen explained that the idea of the Chinese-Jewish conversation at YU actually began in October 2015 when Revel hosted a lecture by Dr. Youde Fu, founding director of the Institute for Judaic and Inter-religious Studies at Shandong University in Jinan, China.

Dr. Fu presented a lecture on “the profound parallels between the Jewish and Chinese traditions,” and over the past three years, Dr. Cohen has been invited by Dr. Fu to teach a course at Shandong, where he has seen “firsthand the connections between our traditions.” 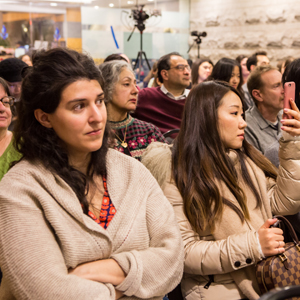 What are these connections? “As a Jewish person,” said Dr. Cohen, “I felt at home in Chinese culture immediately because we share core values: pride in continuous and unbroken cultural, literary and spiritual traditions that go back over 3,000 years; reverence for our ancient traditions embodied in classical texts; respect for our elders and ancestors; belief in the ideal of being part of a community, a family, to care for others; and the role our ancient histories play in our cultures.”

For the next hour, Dr. Katz and Li gave in-depth lectures about the archaeology of Israel and China, specifically looking at how states came into being in each region, or, as Dr. Katz phrased it, “the emergence of civilization.”

Along with offering descriptions of what archaeologists actually do as they extract history from the sherds, bones and artifacts they discover, Dr. Katz and Li also noted the truth that none of the work archaeologists do can be separated from the interpretations people make of it, whether that has to do with confirming a claim of ownership of land or maintaining a myth of cultural homogeneity. 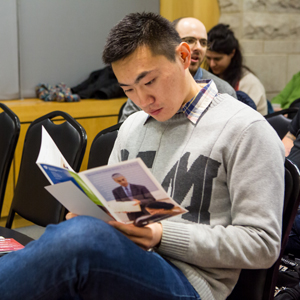 “I hope people learned a bit more,” said Dr. Katz, “about how archaeological interpretations are influenced by both current and historical narratives.”

Li agreed, stating that “the discoveries we have made are more than pottery and bones; they are pieces of a collective and complex human history to which ideology’s contribution is indispensable.”

For the approximately 100 people attending the lecture, this inaugural event of the Chinese-Jewish Conversation at Yeshiva University created a welcome space for YU’s growing Chinese graduate student population while providing the intellectual groundwork for two different cultures to share their commonalities and aspirations.

“By pairing a seasoned professor like Dr. Katz with a talented—and already highly accomplished—young scholar like Debby Li,” noted Dr. Cohen, “this event demonstrated what a university is all about: training the next generation to engage in exciting and meaningful scholarship.”

On March 13, 2019, Revel will present the next iteration of the Chinese-Jewish Conversation at Yeshiva University with a lecture titled “Confucian Role Ethics” by Dr. Roger Ames of Beijing University, a leading world scholar of Confucian thought. Registration is at yu.edu/confucius.