Brethenoux is a research director at Gartner, a company that delivers technology research to global technology business leaders to help them make informed decisions. Brethenoux’s work focuses on machine learning, artificial intelligence and applied cognitive computing. He began his talk, “The Data Science Revolution: The Future of Analytics Is on a Need-to-Know Basis,” by outlining what AI isn’t, noting that most of the understanding that the general public has about AI involves movie images, such as Terminator or The Matrix. He explained that modern society is nowhere close to having the processing power and software sophistication to create movie-like AI.

The trend that AI is taking is towards what Brethenoux calls “calm computing,” a process by which vast troves of data linked by innumerable networks and feeds serve to “augment” an individual’s life. By augment, Brethenoux means providing only enough data in a way and on a schedule to improve a person’s preparation for living his or her life. The goal is not to overwhelm a person with information the way our current system often does, causing some people to check their devices dozens of times a day, but to dole it out as needed and always in the background.

During the talk, Brethenoux demonstrated one example of this using updates from Delta Airlines and Uber. On his phone, he received a notice about his flight from Delta as well as a notice from Uber that the car he ordered would never be able to get him to the airport on time, no matter what route the driver chose. Delta replied by offering him alternate flight times on other airlines that would work better with his schedule, and Uber offered to reschedule the pick-up time to coordinate with whatever alternate flight he chose. All of this was done seamlessly in the background by an AI program pulling from different feeds and organizing the data in real time.

According to Brethenoux, another area of society where AI will play a major role is what is known as the Internet of Things, devices with computers, such as Google’s Nest thermostat, that talk to each other and coordinate functions. For instance, a Nest thermostat connected to a person’s Fitbit training device can know that the person has been running and may want a slightly cooler temperature in the house when he or she returns.

There have been many recent discussions in the news about the possibility that AI and robots will replace or eliminate human jobs and workers, and Brethenoux did not deny that AI may well be used to do that. But his prediction is that AI will follow a path of “augmentation, not substitution—data always being there, but in the background and only when I need it, based on an architecture of relevance, trust and transparency. How people accept and use this new technology will depend upon the educational efforts we make, but this technology is here, and it is moving forward.”

Demuth, chief technology officer and head of the Office of IT Strategy and Architecture at Mayo Clinic in Rochester, Minnesota, delivered a lecture titled, “Realizing the Power of Data in Medicine,” focused on the specific application of AI to the practice of medicine at the Clinic.

Demuth began by describing just how large an organization the Clinic is. It operates in five states and has affiliations with 70 national and international hospitals, and it operates the second-most used health website in the world, mayoclinic.org. “We deal a lot with data in the field of medicine,” he said, and as an example, he cited that the Clinic gathers 10 million images a day from scans performed in the hospital as it serves the 1.3 million people who come there each year.

These data come from 250,000 devices, from handheld devices to every MRI scanner or blood infusion machine, which are all connected to servers. Patients even get a badge with an embedded radio-frequency identification chip to track them in the buildings. If they are told to go to one department but get lost and end up somewhere else, someone in the intake section knows this and can arrange to have them escorted to the proper location.

The data gathered includes not only the electronic feeds from the quarter-million devices. It also includes what Demuth called “unstructured data,” such as doctor’s notes and videos. The application of natural language processing, another form of AI, can read through millions of publicly available documents and provide literature reviews of unimaginable specificity faster than any human being could. The same encyclopedic search-and-catalogue efforts can be conducted with image and videos.

But what is the point, Demuth asked, of gathering all these data and doing sophisticated statistical and pattern analyses? “In the end, it is to make for better delivery of care.” He described a project by a group of dermatologists that reviewed thousands of pictures of skin conditions to create a detailed taxonomy of skin cancers so that diagnoses and cures could be more finely targeted. “But we can never forget that the machines are not dermatologists; they are machines for answering a very specific questions about dermatology,” Demuth noted.

“We want physicians and the people who work with them to be caring as they go through this human transaction with the patients. We also want them to be armed with the best information as they do this, which is what all our data processing is about: how can all of what we know help this individually unique patient. It is never about substituting the analyses delivered by the machines for the judgment and interpretation done by human beings.” He added that “no doctor today can do medicine well if he or she doesn’t have data literacy and an understanding of medical informatics.” 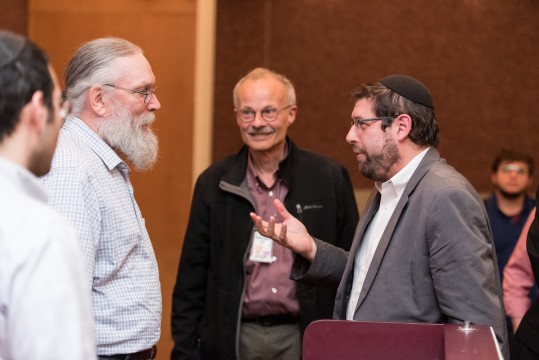 Diament noted that both Brethenoux and Demuth are members of an industry advisory board composed of researchers and executives who have collaborated with the Yeshiva College’s computer science department to define its current curriculum and activities, and are involved in its development in an ongoing basis. “The input, guidance and feedback from the board helps ensure that we provide an education that will make every one of these board members want to hire our computer science graduates,” said Diament.

The lectures are available on YouTube: Brethenoux and Demuth.