Since 1963, Yeshiva University students looking for an engaging encounter with English literature have been able to find courses taught by Dr. Manfred Weidhorn, the Abraham and Irene Guterman Chair in English Literature and professor emeritus of English, on the roster. 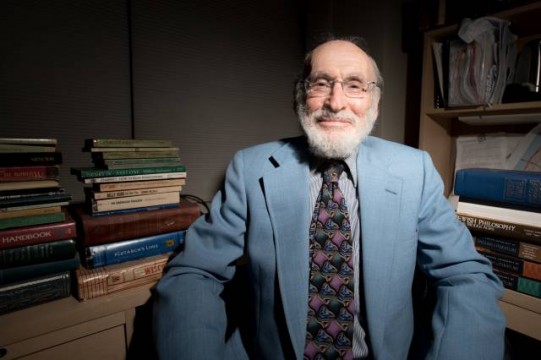 An immigrant from Vienna who earned his PhD in English at Columbia University, Weidhorn is a prolific scholar and writer whose works include a dozen non-fiction books and over a hundreds essays on Shakespeare, Milton, Winston Churchill, Galileo, literary themes, cultural history, and the relationship between religion and science, in addition to young adult biographies of Napoleon, Robert E. Lee, and Jackie Robinson. At Yeshiva College and Stern College for Women, he has taught classes on topics that range from the Russian short novel to the Scientific Revolution and everything in between, encouraging students to approach each topic in new and sometimes unconventional ways.

As Weidhorn prepares to leave the teaching life to focus on his writing, YU News sat down with him to discuss his passion for literature, the ways in which his field—and students—have evolved over the last half a century and why it’s never too late to pursue a dream.

How did you discover your love for literature?

I was born in Vienna, and when I was six years old my family tried to flee to the United States to escape Hitler. My father was in Paris trying to start a business and my mother and I were visiting my grandparents when Hitler took over Austria, so we fled to Paris. My father went to the United States to try to bring us over; in the meantime, my mother and my grandparents and I went to Antwerp. Then Hitler invaded there, too. We tried to get away but ended up in occupied Paris for a year. Then we had to sneak across the border between occupied and unoccupied France and wait for transit visas to Spain and Cuba, and once we got to Havana, for immigration visas to America. (I’ve actually just finished writing a memoir about these years, called Escape to Freedom: A True Story of Becoming American in a Dark Time.)

As a refugee in Havana, I used to hang around with a bunch of kids in a hotel lobby, and I’d spontaneously tell them stories. They seemed to like them and I started to think that I had this talent for storytelling. When I finally reached America and got an education I started to write stories and novels. I did this for many years, but I never published anything. It turned out that I did have a talent for writing, just not fiction. But to further develop my writing skills, I began to read a lot of novels, and eventually I decided that instead of trying to create literature, I would use my passion to share it. That’s how I became a professor of literature.

What are your particular areas of interest?

I consider myself a cultural historian tracing the impact of science on society. My doctoral dissertation was on dreams in 17th-century literature; I’ve also focused on Winston Churchill and Galileo. More recently I’ve tried my hand at writing aphorisms—one liners. Here is an example: “Humankind does not deserve itself.” You can read that in two ways: either we’re good and we don’t deserve the horrors that we perpetrate, or we’re so awful that we don’t deserve the great things that Shakespeare and Bach and others have achieved.

What authors and works have influenced you? How?

Of course, Galileo has influenced me. It was only about 15 or 20 years ago that I became conscious of just how significant a role he played in history. I was teaching a course on the Enlightenment and I thought it would be proper to start with what ignited it, namely, the Scientific Revolution, so I began to read some of his writings. I started to become aware that he was much more important than I had previously realized. A few years later Physics Professor Gabriel Cwilich assigned the Honors students the play “Galileo” by Bertolt Brecht. I read it too, and his version made me want to dig deeper into the actual, historical Galileo.

There were many great authors that turned me onto literature: Shakespeare; Michel de Montaigne, the French essayist; especially Fyodor Dostoevsky’s novel The Brothers Karamazov— a great book, whose dealings with the problem of evil and related themes really gave me a sense of what a delight it would be to write a book like that. In fact, it encouraged me to keep writing myself. I wrote dozens of novels, all unpublished. But this story has a surprising ending: There was actually a short passage in one novel I wrote early on which I have just turned into a short story 50 years later, and it was published in Australia in SKIVE: The Short Story Quarterly. I came back to it 50 years later and published it! So you can write on my tombstone, “He did publish fiction.” The passage of all those years enables you to bring much more experience and wisdom to your work.

What’s your favorite course to teach?

I like “From Tradition to Modernity,” which starts with the New Testament and ends with modern works, tracing the way in which traditional society arises and then is undermined by two individuals: Martin Luther and Galileo. A century apart, they apply a  one-two punch to the assumptions of traditional society and create modern society out of the ensuing chaos. I love the course. It’s fascinating to see how cultural change takes place, specifically through the roles of two giants who played the largest parts within the Protestant Reformation and Scientific Revolution.

A couple of years ago, I taught a course on the Russian short novel first at Yeshiva, then at Stern. In both classes there was vigorous give and take and the students were really involved, fully participating, talking back and arguing. I remember coming out of those classes feeling very fulfilled—like I had earned my pay.

Which of your own works are you most proud of, and why?

That would have to be The Person of the Millennium, a book I wrote on the unique impact of Galileo on world history. I make the point that Galileo is the single most influential person that ever lived: He started the Scientific Revolution, and science is the biggest difference between traditional and modern society. A Galileo scholar reviewing the book called it “thoughtful and thought-provoking,” and I can’t think of sweeter words to hear about a book.

I’m also proud of Sword and Pen and A Harmony of Interests, both about Winston Churchill—one reviewer said that more than any biography of Churchill, the latter book sheds light on his mind. It’s interesting how I came to write about him. While we were fleeing from the Nazis, we were on a ferry boat somewhere in France. I was the one to translate the French newspaper into Yiddish for my grandfather, who didn’t read French. The name of Churchill came up, and my grandfather said, “Oh, that Churchill is a great man.” For some reason that stuck with me—25 years later I ended up writing about him in my works.

How do you think the field of English literature has evolved since you began teaching?

It’s broken many boundaries. In the 19th century, the novel was written in a realistic mode with certain conventional narrative procedures, usually chronological; in the 20th and 21st centuries, we’ve had all kinds of experiments, manipulating points of view, styles and treating the interior life much more deeply and realistically. It’s parallel to what has gone on in the field of painting, from realistic art to abstract art, and in music, with the rise of dissonant music in the 20th century. The changing of society has brought with it changes in all of the arts.

What’s your advice to students just beginning their college careers?

Keep an open mind and break away from the bad habit that people have—and this is universal—of indulging in group-think, thinking the way your relatives and friends think, having all the same ideas, because those ideas are usually in some way limited. I see the function of education to be just that: to expose students to all kinds of contrary viewpoints—Christianity and atheism, the clash between liberalism and conservatism. Neither side has the answer. When you study each one, you only get hold of part of reality. Most people think they do have the Answer and can become dogmatic about it. I think that’s foolish, because it’s very hard to find out the truth about anything, at least anything important.