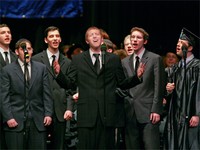 May 27, 2009 — Two Yeshiva University graduation ceremonies at Madison Square Garden, a performance at the 92nd Street Y and numerous singing engagements on and off campus: that’s Yeshiva University a cappella group the Maccabeats’ brief résumé since forming two years ago. Sensing the need to bring music to the Wilf Campus, the group of 12 young men, all undergraduate students, has become a popular mainstay on campus.

As a high school student, Michael Greenberg participated in Yeshivah of Flatbush’s successful performing arts programs. Upon entering Yeshiva College last year, Greenberg and his friends worked diligently with student leaders to establish the Maccabeats. They were quickly embraced by the YU community.

“The student body as well as President Richard Joel have been great sources of positive feedback,” said Greenberg who hopes to one day partner with the University to record a CD.

This year, the Maccabeats have increased the number of their performances, attracting overwhelmingly positive reactions from their audiences. “After each performance, I have been approached by several people with compliments and praise for the group,” Josh Jay, another member of the group, said. “At graduation, people cheered for us before we walked on stage.”

Most of the Maccabeats’ repertoire consists of Hebrew psalms and prayers. What makes them such a hit with audiences is that the familiar lyrics have been set to some surprising tunes, such as L’cha Dodi sung to the tune of Hallelujah as performed by Leonard Cohen. “My hope is that we can give our audience the same feeling and spiritual high that we experience when we sing,” said Block. “It’s a prayer, both for us and for our listeners!”

Perhaps the most telling sign of the Maccabeats’ popularity came on May 13 as students were in the midst of buckling down for final exams. The group offered them a study break performance in the Morgenstern Hall Lounge. “The concert was a huge success,” Ritholtz said. “Students took time out of their finals studying to come watch us perform, which was really exhilarating.”